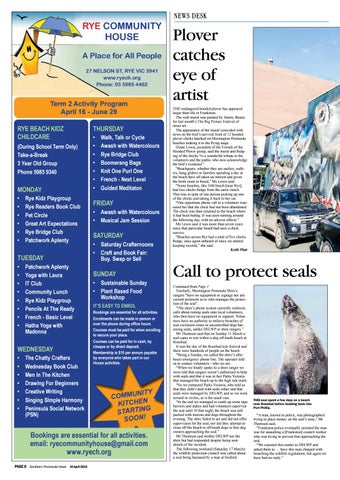 • Sustainable Sunday • Plant Based Food Workshop IT’S EASY TO ENROL Bookings are essential for all activities. Enrolments can be made in person or over the phone during office hours. Courses must be paid for when enrolling to secure your place. Courses can be paid for in cash, by cheque or by direct deposit. Membership is $10 per annum payable by everyone who takes part in our House activities.

Bookings are essential for all activities. email: ryecommunityhouse@gmail.com www.ryech.org PAGE 6

Plover catches eye of artist THE endangered hooded plover has appeared larger than life in Frankston. The wall mural was painted by Jimmy Beatie for last month’s The Big Picture Festival of street art. The appearance of the mural coincided with news on the bird’s survival front of 12 hooded plover chicks hatched on Mornington Peninsula beaches making it to the flying stage. Diane Lewis, president of the Friends of the Hooded Plover group, said the mural and fledging of the chicks “is a wonderful tribute to the volunteers and the public who now acknowledge the bird’s existence”. “Beachgoers, whether they are surfers, walkers, hang gliders or families spending a day at the beach have all taken an interest and given the birds room to breed,” Ms Lewis said. “Some beaches, like 16th beach [near Rye], had two chicks fledge from the same clutch. This was in spite of one person picking up one of the chicks and taking it back to her car. “One opportune phone call to a volunteer reassured her that the chick had not been abandoned. The chick was then returned to the beach where it had been hiding. It was seen running around the following day, with no adverse effects.” Ms Lewis said it was more than seven years since that particular beach had seen a chick survive. “Beaches across Rye had a total of five chicks fledge, once again unheard of since we started keeping records,” she said. Keith Platt

Call to protect seals Continued from Page 1 Similarly, Mornington Peninsula Shire’s rangers “have no equipment or signage nor any current protocols as to who manages the protection of the seal”. “The shire’s phone system currently redirects calls about resting seals onto local volunteers, who then have no equipment or support. Volunteers have no authority to enforce breaches of seal exclusion zones or uncontrolled dogs harassing seals, unlike DELWP or shire rangers.” Mr Thomson said that on Sunday 11 March a seal came to rest within a dog off-leash beach at Rosebud. It was the day of the Rosebud kite festival and there were hundreds of people on the beach. “Being a Sunday, we called the shire‘s after hours emergency phone line. The operator told us to contact volunteers - who we are. “When we finally spoke to a shire ranger we were told that rangers weren’t authorised to help with seals and that it was in fact Parks Victoria that managed the beach up to the high tide mark. “So we contacted Parks Victoria, who told us that they didn’t deal with seals either and that seals were managed by DELWP, and so we went around in circles, as is the usual case. “In the end we managed to rustle up some tape barriers and stakes and had volunteers supervise the seal until 10 that night, the beach was still packed with tourists and dogs throughout the evening. The shire failed to act and did not offer supervision for the seal, nor did they attempt to close off the beach to off-leash dogs or fine dog owners approaching the seal.” Mr Thomson said neither DELWP nor the shire but had responded despite being sent details of the incident. The following weekend (Saturday 17 March) the wildlife protection council was called about a seal being harassed by a man at Seaford.

THIS seal spent a few days on a beach near Rosebud before heading back into Port Phillip.

“A man, known to police, was photographed trying to place money on the seal’s nose,” Mr Thomson said. “Frankston police eventually arrested the man was for assaulting a [Frankston] council worker who was trying to prevent him approaching the seal. “We reported this matter to DELWP and asked them to … have this man charged with breaching the wildlife regulations, but again we have had no reply.”