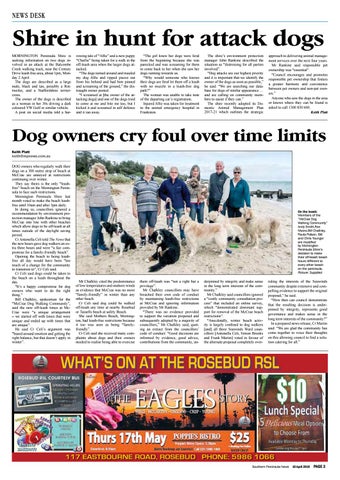 Shire in hunt for attack dogs MORNINGTON Peninsula Shire is seeking information on two dogs involved in an attack at the Balcombe Creek walking track, near the Century Drive leash free area, about 1pm, Monday 2 April. The dogs are described as a large male, black and tan, possibly a Rottweiler, and a Staffordshire terriercross. The owner of the dogs is described as a woman in her 30s driving a dark coloured VW Golf or similar vehicle. A post on social media told a har-

rowing tale of “Alfie” and a new puppy “Charlie” being taken for a walk in the off-leash area when the larger dogs attacked. “The dogs turned around and mauled my dog Alfie and ripped pieces out from his behind and had him pinned and screaming of the ground,” the distraught owner posted. “I screamed at [the owner of the attacking dogs] and one of the dogs tried to come at me and bite me too, but I kicked it and screamed in self defence and it ran away.

“The girl knew her dogs were feral from the beginning because she was panicked and was screaming for them to come back to her when she saw her dogs running towards us. “Why would someone who knows their dogs are feral let them off a leash with no muzzle in a leash-free dog park?” The woman was unable to take note of the departing car’s registration. Injured Alfie was taken for treatment to the animal emergency hospital in Frankston.

The shire’s environment protection manager John Rankine described the situation as “distressing for all parties involved”. “Dog attacks are our highest priority and it is important that we identify the owner of the dogs as soon as possible,” he said. “We are searching our database for dogs of similar appearance … and are calling on community members to assist if they can.” The shire recently adopted its Domestic Animal Management Plan 2017-21 which outlines the strategic

Dog owners cry foul over time limits Keith Platt keith@mpnews.com.au DOG owners who regularly walk their dogs on a 300 metre strip of beach at McCrae are annoyed at restrictions continuing over winter. They say theirs is the only “leashfree” beach on the Mornington Peninsula to face such restrictions. Mornington Peninsula Shire last month voted to make the beach leashfree until 10am and after 3pm daily. In doing so, councillors ignored a recommendation by environment protection manager John Rankine to bring McCrae into line with other beaches which allow dogs to be off-leash at all times outside of the daylight saving period. Cr Antonella Celi told The News that the new hours gave dog walkers an extra three hours and were “a fair compromise for a family-friendly beach”. Opening the beach to being leashfree all day would have been “too much of a change for the community to transition to”, Cr Celi said. Cr Celi said dogs could be taken to the beach on a leash throughout the day. “It’s a happy compromise for dog owners who want to do the right thing.” Bill Chalkley, spokesman for the “McCrae Dog Walking Community”, said the new off-leash times at McCrae were “a unique arrangement – we started off with times that were unique and ended up with times that are unique”. He said Cr Celi’s argument was “based around emotion and getting the right balance, but that doesn’t apply in winter”.

On the leash: Members of the “McCrae Dog Walking Community” Andy Smith,Ron Moore,Bill Chalkley, Paula Polson, Bill and Chris Younger are mystified by Mornington Peninsula Shire’s decision to make their off-leash beach hours different to every other beach on the peninsula. Picture: Supplied

Mr Chalkley cited the predominance of low temperatures and onshore winds as evidence that McCrae was no more “family-friendly” in winter than any other beach. Cr Celi said dog could be walked off-leash any time at nearby Rosebud or Tassells beach at safety Beach. She said Mothers Beach, Mornington, had leash-free restrictions because it too was seen as being “familyfriendly”. Cr Celi said she received many complaints about dogs and their owners needed to realise being able to exercise

them off-leash was “not a right but a privilege”. Mr Chalkley councillors may have breached their own code of conduct by maintaining leash-free restrictions at McCrae and ignoring information provided by Mr Rankine. “There was no evidence provided to support the variation proposed and subsequently adopted by a majority of councillors,” Mr Chalkley said, quoting an extract from the councillors’ code of conduct: “Good decisions are informed by evidence, good advice, contributions from the community, un-

derpinned by integrity and make sense in the long term interests of the community.” Mr Chalkley said councillors ignored a “costly community consultation process” that included an online survey, which “demonstrated dominant support for removal of the McCrae beach restrictions”. “Anecdotally, winter beach activity is largely confined to dog walkers [and] all three Seawinds Ward councillors [Antonella Celi, Simon Brooks and Frank Martin] voted in favour of the alternate proposal completely over-

ruling the interests of the Seawinds community despite extensive and compelling evidence to support the original proposal,” he said. “How then can council demonstrate that the resulting decision is underpinned by integrity, represents good governance and makes sense in the long term interests of the community?” In a prepared news release, Cr Martin said: “We are glad the community has come together to voice their thoughts on this allowing council to find a solution catering for all.”