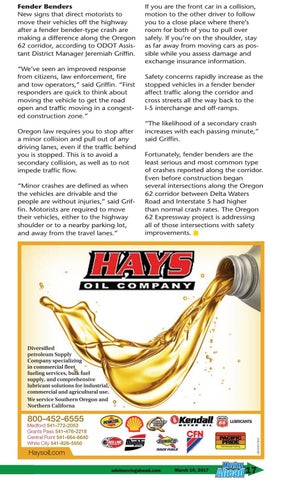 Fender Benders New signs that direct motorists to move their vehicles off the highway after a fender bender-type crash are making a difference along the Oregon 62 corridor, according to ODOT Assistant District Manager Jeremiah Griffin. “We’ve seen an improved response from citizens, law enforcement, fire and tow operators,” said Griffin. “First responders are quick to think about moving the vehicle to get the road open and traffic moving in a congested construction zone.” Oregon law requires you to stop after a minor collision and pull out of any driving lanes, even if the traffic behind you is stopped. This is to avoid a secondary collision, as well as to not impede traffic flow. “Minor crashes are defined as when the vehicles are drivable and the people are without injuries,” said Griffin. Motorists are required to move their vehicles, either to the highway shoulder or to a nearby parking lot, and away from the travel lanes.”

If you are the front car in a collision, motion to the other driver to follow you to a close place where there’s room for both of you to pull over safely. If you’re on the shoulder, stay as far away from moving cars as possible while you assess damage and exchange insurance information. Safety concerns rapidly increase as the stopped vehicles in a fender bender affect traffic along the corridor and cross streets all the way back to the I-5 interchange and off-ramps. “The likelihood of a secondary crash increases with each passing minute,” said Griffin. Fortunately, fender benders are the least serious and most common type of crashes reported along the corridor. Even before construction began several intersections along the Oregon 62 corridor between Delta Waters Road and Interstate 5 had higher than normal crash rates. The Oregon 62 Expressway project is addressing all of those intersections with safety improvements.