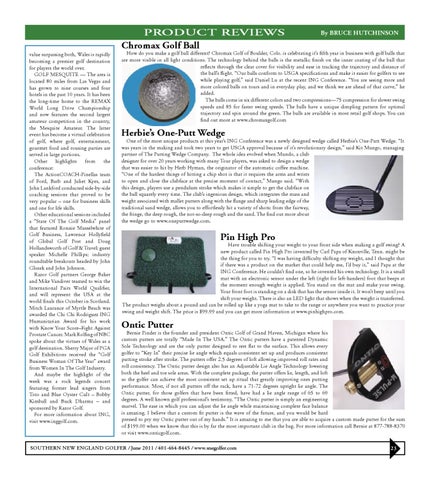 PRODUCT REVIEWS Chromax Golf Ball value surpassing both, Wales is rapidly becoming a premier golf destination for players the world over. GOLF MESQUITE — The area is located 80 miles from Las Vegas and has grown to nine courses and four hotels in the past 10 years. It has been the long-time home to the REMAX World Long Drive Championship and now features the second largest amateur competition in the country, the Mesquite Amateur. The latter event has become a virtual celebration of golf, where golf, entertainment, gourmet food and rousing parties are served in large portions. Other highlights from the conference: The ActionCOACH-Pinellas team of Ford, Barb and Juliet Kyes, and John Lankford conducted side-by-side coaching sessions that proved to be very popular – one for business skills and one for life skills. Other educational sessions included a “State Of The Golf Media” panel that featured Ronnie Musselwhite of Golf Business, Lawrence Hollyﬁeld of Global Golf Post and Doug Hollandsworth of Golf &amp; Travel; guest speaker Michelle Phillips; industry roundtable breakouts headed by John Glozek and John Johnson. Razor Golf partners George Baker and Mike Vandiver teamed to win the International Pairs World Qualiﬁer, and will represent the USA at the world ﬁnals this October in Scotland. Mitch Laurance of Myrtle Beach was awarded the Chi Chi Rodriguez ING Humanitarian Award for his work with Know Your Score–Fight Against Prostate Cancer. Mark Rolﬁng of NBC spoke about the virtues of Wales as a golf destination. Sherry Major of PGA Golf Exhibitions received the “Golf Business Woman Of The Year” award from Women In The Golf Industry. And maybe the highlight of the week was a rock legends concert featuring former lead singers from Toto and Blue Oyster CuIt – Bobby Kimball and Buck Dharma – and sponsored by Razor Golf. For more information about ING, visit www.inggolf.com.

How do you make a golf ball different? Chromax Golf of Boulder, Colo. is celebrating it’s ﬁfth year in business with golf balls that are more visible in all light conditions. The technology behind the balls is the metallic ﬁnish on the inner coating of the ball that reﬂects through the clear cover for visibility and ease in tracking the trajectory and distance of the ball’s ﬂight. “Our balls conform to USGA speciﬁcations and make it easier for golfers to see while playing golf,” said Daniel Lu at the recent ING Conference. “You are seeing more and more colored balls on tours and in everyday play, and we think we are ahead of that curve,” he added. The balls come in six different colors and two compressions—75 compression for slower swing speeds and 85 for faster swing speeds. The balls have a unique dimpling pattern for optimal trajectory and spin around the green. The balls are available in most retail golf shops. You can ﬁnd out more at www.chromaxgolf.com

One of the most unique products at this year’s ING Conference was a newly designed wedge called Herbie’s One-Putt Wedge. “It was years in the making and took two years to get USGA approval because of it’s revolutionary design,” said Kit Mungo, managing partner of The Putting Wedge Company. The whole idea evolved when Mundo, a club designer for over 20 years working with many Tour players, was asked to design a wedge that was easier to hit by Herb Hyman, the originator of the automatic coffee machine. “One of the hardest things of hitting a chip shot is that it requires the arms and wrists to open and close the clubface at the precise moment of contact,” Mungo said. “With this design, players use a pendulum stroke which makes it simple to get the clubface on the ball squarely every time. The club’s ingenious design, which integrates the mass and weight associated with mallet putters along with the ﬂange and sharp leading edge of the traditional sand wedge, allows you to effortlessly hit a variety of shots: from the fairway, the fringe, the deep rough, the not-so-deep rough and the sand. The ﬁnd out more about the wedge go to www.oneputtwedge.com.

Have trouble shifting your weight to your front side when making a golf swing? A new product called Pin High Pro invented by Carl Papa of Knoxville, Tenn. might be the thing for you to try. “I was having difﬁculty shifting my weight, and I thought that if there was a product on the market that could help me, I’d buy it,” said Papa at the ING Conference. He couldn’t ﬁnd one, so he invented his own technology. It is a small mat with an electronic sensor under the left (right for left-handers) foot that beeps at the moment enough weight is applied. You stand on the mat and make your swing. Your front foot is standing on a disk that has the sensor inside it. It won’t beep until you shift your weight. There is also an LED light that shows when the weight is transferred. The product weighs about a pound and can be rolled up like a yoga mat to take to the range or anywhere you want to practice your swing and weight shift. The price is $99.99 and you can get more information at www.pinhighpro.com.

Bernie Pinder is the founder and president Ontic Golf of Grand Haven, Michigan where his custom putters are totally “Made In The USA.” The Ontic putters have a patented Dynamic Sole Technology and are the only putter designed to rest ﬂat to the surface. This allows every golfer to “Key In” their precise lie angle which equals consistent set up and produces consistent putting stroke after stroke. The putters offer 2.5 degrees of loft allowing improved roll rates and roll consistency. The Ontic putter design also has an Adjustable Lie Angle Technology lowering both the heel and toe sole areas. With the complete package, the putter offers lie, length, and loft so the golfer can achieve the most consistent set up ritual that greatly improving ones putting performance. Most, if not all putters off the rack, have a 71-72 degrees upright lie angle. The Ontic putter, for those golfers that have been ﬁtted, have had a lie angle range of 65 to 69 degrees. A well known golf professional’s testimony, “The Ontic putter is simply an engineering marvel. The ease in which you can adjust the lie angle while maintaining complete face balance is amazing. I believe that a custom ﬁt putter is the wave of the future, and you would be hard pressed to pry my Ontic putter out of my hands.” It is amazing to me that you are able to acquire a custom made putter for the sum of $199.00 when we know that this is by far the most important club in the bag. For more information call Bernie at 877-788-8370 or visit www.onticgolf.com.

About Southern New England Golfer is a collaboration of Ocean State Golf and Western Mass Golf and has over 20 years experience in the golf publishing business. SNE Golfer has numerous websites, three golf radio shows on New England’s number one sports radio network WEEI, our own magazine SNE Golfer and the largest data base of golfers in New England. Each week SNE Golfer will reach over 100,000 golfers. We are the only publication at all the golf expos throughout New England. We target golfers! 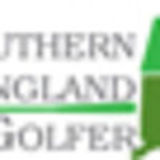