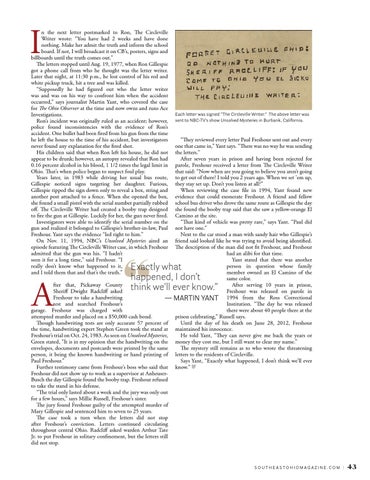 was having an endent Gordon

hird letter that ” from the writer not take action

n the next letter postmarked to Ron, The Circleville Writer wrote: “You have had 2 weeks and have done nothing. Make her admit the truth and inform the school board. If not, I will broadcast it on CB’s, posters, signs and billboards until the truth comes out.” The letters stopped until Aug. 19, 1977, when Ron Gillespie got a phone call from who he thought was the letter writer. Later that night, at 11:30 p.m., he lost control of his red and white pickup truck, hit a tree and was killed. “Supposedly he had figured out who the letter writer was and was on his way to confront him when the accident occurred,” says journalist Martin Yant, who covered the case for The Ohio Observer at the time and now owns and runs Ace Investigations. Ron’s incident was originally ruled as an accident; however, police found inconsistencies with the evidence of Ron’s accident. One bullet had been fired from his gun from the time he left the house to the time of his accident, but investigators never found any explanation for the fired shot. His children said that when Ron left his house, he did not appear to be drunk; however, an autopsy revealed that Ron had 0.16 percent alcohol in his blood, 1 1/2 times the legal limit in Ohio. That’s when police began to suspect foul play. Years later, in 1983 while driving her usual bus route, Gillespie noticed signs targeting her daughter. Furious, Gillespie ripped the sign down only to reveal a box, string and another post attached to a fence. When she opened the box, she found a small pistol with the serial number partially rubbed off. The Circleville Writer had created a booby trap designed to fire the gun at Gillespie. Luckily for her, the gun never fired. Investigators were able to identify the serial number on the gun and realized it belonged to Gillespie’s brother-in-law, Paul Freshour. Yant says the evidence “led right to him.” On Nov. 11, 1994, NBC’s  Unsolved Mysteries  aired an episode featuring The Circleville Writer case, in which Freshour admitted that the gun was his. “I hadn’t seen it for a long time,” said Freshour. “I really don’t know what happened to it, and I told them that and that’s the truth.”

Each letter was signed “The Circleville Writer.” The above letter was sent to NBC-TV’s show Unsolved Mysteries in Burbank, California.

“They reviewed every letter Paul Freshour sent out and every one that came in,” Yant says. “There was no way he was sending the letters.” After seven years in prison and having been rejected for parole, Freshour received a letter from The Circleville Writer that said: “Now when are you going to believe you aren’t going to get out of there? I told you 2 years ago. When we set ’em up, they stay set up. Don’t you listen at all?” When reviewing the case file in 1994, Yant found new evidence that could exonerate Freshour. A friend and fellow school bus driver who drove the same route as Gillespie the day she found the booby trap said that she saw a yellow-orange El Camino at the site. “That kind of vehicle was pretty rare,” says Yant. “Paul did not have one.” Next to the car stood a man with sandy hair who Gillespie’s friend said looked like he was trying to avoid being identified. The description of the man did not fit Freshour, and Freshour had an alibi for that time. Yant stated that there was another person in question whose family member owned an El Camino of the same color. fter that, Pickaway County After serving 10 years in prison, Sheriff Dwight Radcliff asked Freshour was released on parole in Freshour to take a handwriting — MARTIN YANT 1994 from the Ross Correctional test and searched Freshour’s Institution. “The day he was released garage. Freshour was charged with there were about 40 people there at the attempted murder and placed on a $50,000 cash bond. prison celebrating,” Russell says. Though handwriting tests are only accurate 57 percent of Until the day of his death on June 28, 2012, Freshour the time, handwriting expert Stephen Green took the stand at maintained his innocence. Freshour’s trial on Oct. 24, 1983. As seen on Unsolved Mysteries, He told Yant, “They can never give me back the years or Green stated, “It is in my opinion that the handwriting on the money they cost me, but I still want to clear my name.” envelopes, documents and postcards were printed by the same The mystery still remains as to who wrote the threatening person, it being the known handwriting or hand printing of letters to the residents of Circleville. Paul Freshour.” Says Yant, “Exactly what happened, I don’t think we’ll ever Further testimony came from Freshour’s boss who said that know.” Freshour did not show up to work as a supervisor at AnheuserBusch the day Gillespie found the booby trap. Freshour refused to take the stand in his defense. “The trial only lasted about a week and the jury was only out for a few hours,” says Millie Russell, Freshour’s sister. The jury found Freshour guilty of the attempted murder of Mary Gillespie and sentenced him to seven to 25 years. The case took a turn when the letters did not stop after Freshour’s conviction. Letters continued circulating throughout central Ohio. Radcliff asked warden Arthur Tate Jr. to put Freshour in solitary confinement, but the letters still did not stop.

Exactly what happened, I don’t think we’ll ever know.” 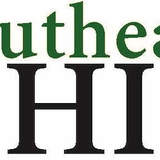