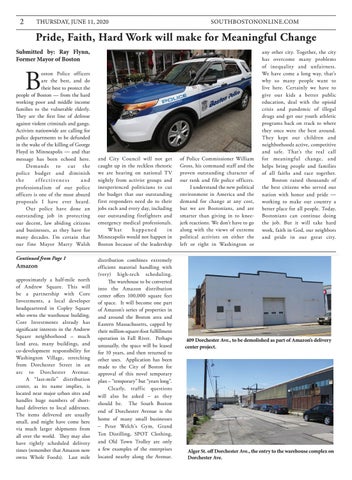 oston Police officers are the best, and do their best to protect the people of Boston — from the hard working poor and middle income families to the vulnerable elderly. They are the first line of defense against violent criminals and gangs. Activists nationwide are calling for police departments to be defunded in the wake of the killing of George Floyd in Minneapolis — and that message has been echoed here. Dema nds to cut t he police budget and diminish the ef fectiveness a nd professionalism of our police officers is one of the most absurd proposals I have ever heard. Our police have done an outstanding job in protecting our decent, law abiding citizens and businesses, as they have for many decades. I’m certain that our fine Mayor Marty Walsh Continued from Page 1

Amazon approximately a half-mile north of Andrew Square. This will be a partnership with Core Investments, a local developer headquartered in Copley Square who owns the warehouse building. Core Investments already has significant interests in the Andrew Square neighborhood – much land area, many buildings, and co-development responsibility for Washington Village, stretching from Dorchester Street in an arc to Dorchester Avenue. A “last-mile” distribution center, as its name implies, is located near major urban sites and handles huge numbers of shorthaul deliveries to local addresses. The items delivered are usually small, and might have come here via much larger shipments from all over the world. They may also have tightly scheduled delivery times (remember that Amazon now owns Whole Foods). Last mile

and City Council will not get caught up in the reckless rhetoric we are hearing on national TV nightly from activist groups and inexperienced politicians to cut the budget that our outstanding first responders need do to their jobs each and every day, including our outstanding firefighters and emergency medical professionals. W hat happened in Minneapolis would not happen in Boston because of the leadership distribution combines extremely efficient material handling with (very) high-tech scheduling. The warehouse to be converted into the Amazon distribution center offers 100,000 square feet of space. It will become one part of Amazon’s series of properties in and around the Boston area and Eastern Massachusetts, capped by their million-square-foot fulfillment operation in Fall River. Perhaps unusually, the space will be leased for 10 years, and then returned to other uses. Application has been made to the City of Boston for approval of this novel temporary plan – “temporary” but “years long”. Clearly, traffic questions will also be asked – as they should be. The South Boston end of Dorchester Avenue is the home of many small businesses – Peter Welch’s Gym, Grand Ten Distilling, SPOT Clothing, and Old Town Trolley are only a few examples of the enterprises located nearby along the Avenue.

of Police Commissioner William Gross, his command staff and the proven outstanding character of our rank and file police officers. I understand the new political environment in America and the demand for change at any cost, but we are Bostonians, and are smarter than giving in to kneejerk reactions. We don’t have to go along with the views of extreme political activists on either the left or right in Washington or

any other city. Together, the city has overcome many problems of inequality and unfairness. We have come a long way, that’s why so many people want to live here. Certainly we have to give our kids a better public education, deal with the opioid crisis and pandemic of illegal drugs and get our youth athletic programs back on track to where they once were the best around. They kept our children and neighborhoods active, competitive and safe. That’s the real call for meaningful change, and helps bring people and families of all faiths and race together. Boston raised thousands of the best citizens who served our nation with honor and pride — working to make our country a better place for all people. Today, Bostonians can continue doing the job. But it will take hard work, faith in God, our neighbors and pride in our great city.

409 Dorchester Ave., to be demolished as part of Amazon’s delivery center project.