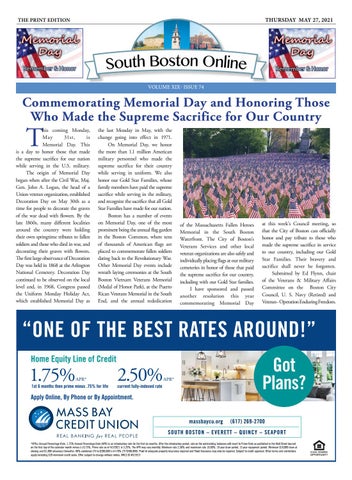 his coming Monday, May 31st, is Memorial Day. This is a day to honor those that made the supreme sacrifice for our nation while serving in the U.S. military. The origin of Memorial Day began when after the Civil War, Maj. Gen. John A. Logan, the head of a Union veteran organization, established Decoration Day on May 30th as a time for people to decorate the graves of the war dead with flowers. By the late 1860s, many different localities around the country were holding their own springtime tributes to fallen soldiers and those who died in war, and decorating their graves with flowers. The first large observance of Decoration Day was held in 1868 at the Arlington National Cemetery. Decoration Day continued to be observed on the local level and, in 1968, Congress passed the Uniform Monday Holiday Act, which established Memorial Day as

the last Monday in May, with the change going into effect in 1971. On Memorial Day, we honor the more than 1.1 million American military personnel who made the supreme sacrifice for their country while serving in uniform. We also honor our Gold Star Families, whose family members have paid the supreme sacrifice while serving in the military, and recognize the sacrifice that all Gold Star Families have made for our nation. Boston has a number of events on Memorial Day, one of the most prominent being the annual flag garden in the Boston Common, where tens of thousands of American flags are placed to commemorate fallen soldiers dating back to the Revolutionary War. Other Memorial Day events include wreath laying ceremonies at the South Boston Vietnam Veterans Memorial (Medal of Honor Park), at the Puerto Rican Veterans Memorial in the South End, and the annual rededication

of the Massachusetts Fallen Heroes Memorial in the South Boston Waterfront. The City of Boston’s Veterans Services and other local veteran organizations are also safely and individually placing flags at our military cemeteries in honor of those that paid the supreme sacrifice for our country, including with our Gold Star families. I have sponsored and passed another resolution this year commemorating Memorial Day

at this week’s Council meeting, so that the City of Boston can officially honor and pay tribute to those who made the supreme sacrifice in service to our country, including our Gold Star Families. Their bravery and sacrifice shall never be forgotten.   Submitted by Ed Flynn, chair of the Veterans & Military Affairs Committee on the  Boston City Council, U. S. Navy (Retired) and Veteran - Operation Enduring Freedom.

“ONE OF THE BEST RATES AROUND!” Home Equity Line of Credit

Apply Online, By Phone or By Appointment.

SOUTH BOSTON – EVERETT – QUINCY – SEAPORT *APR= Annual Percentage Rate. 1.75% Annual Percentage Rate (APR) is an introductory rate for the first six months. After the introductory period, rate on the outstanding balances will revert to Prime Rate as published in the Wall Street Journal on the first day of the calendar month minus (-) 0.75%. Prime rate as of 4/1/2021 is 3.25%. The APR may vary monthly. Minimum rate 2.50% and maximum rate 18.00%. 10 year draw period. 15 year repayment period. Minimum $10,000 draw at closing and $1,000 advances thereafter. 80% combined LTV to $200,000 (</=70% LTV $300,000). Proof of adequate property insurance required and Flood Insurance may also be required. Subject to credit approval. Other terms and restrictions apply including 620 minimum credit score. Offer subject to change without notice. NMLS ID #615913