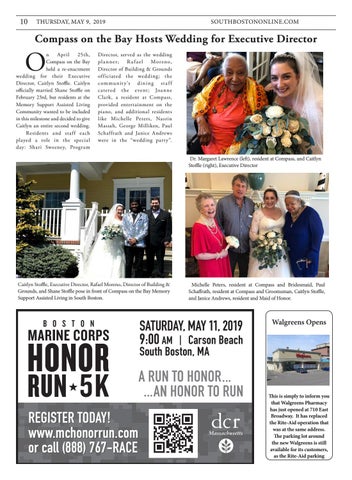 Compass on the Bay Hosts Wedding for Executive Director

n April 25th, Compass on the Bay held a re-enactment wedding for their Executive Director, Caitlyn Stoffle. Caitlyn officially married Shane Stoffle on February 23rd, but residents at the Memory Support Assisted Living Community wanted to be included in this milestone and decided to give Caitlyn an entire second wedding. Residents and staff each played a role in the special day: Shari Sweeney, Program

This is simply to inform you that Walgreens Pharmacy has just opened at 710 East Broadway. It has replaced the Rite-Aid operation that was at the same address. The parking lot around the new Walgreens is still available for its customers, as the Rite-Aid parking