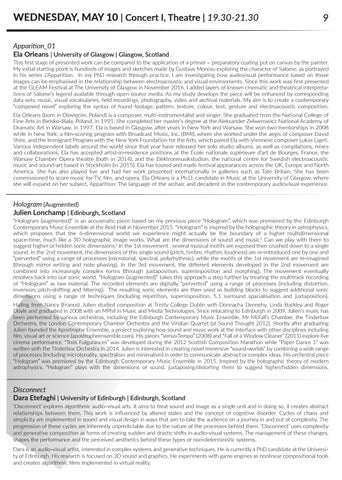 Apparition_01 Ela Orleans | University of Glasgow | Glasgow, Scotland This ﬁrst stage of presented work can be compared to the application of a primer – preparatory coating put on canvas by the painter. My initial starting point is hundreds of images and sketches made by Gustave Moreau exploring the character of Salome, as portrayed in his series L&#39;Apparition. In my PhD research through practice, I am investigating how audiovisual performance based on those images can be emphasised in the relationship between electroacoustic and visual environments. Since this work was ﬁrst presented at the GLEAM Festival at The University of Glasgow in November 2016, I added layers of known cinematic and theatrical interpretations of Salome’s legend available through open source media. As my study develops the piece will be enhanced by corresponding data sets: music, visual vocabularies, ﬁeld recordings, photography, video and archival materials. My aim is to create a contemporary &quot;composed novel” exploring the syntax of found footage, pattern, texture, colour, text, gesture and electroacoustic composition. Ela Orleans (born in Oświęcim, Poland) is a composer, multi-instrumentalist and singer. She graduated from the National College of Fine Arts in Bielsko-Biala, Poland, in 1991. She completed her master’s degree at the Aleksander Zelwerowicz National Academy of Dramatic Art in Warsaw, in 1997. Ela is based in Glasgow, after years in New York and Warsaw. She won two mentorships in 2008 while in New York: a ﬁlm-scoring program with Broadcast Music, Inc. (BMI), where she worked under the aegis of composer David Shire, and the Immigrant Program with the New York Foundation for the Arts, which paired Ela with Viennese composer Lukas Ligeti. Various independent labels around the world since that year have released her solo studio albums, as well as compilations, mixes and collaborations. Ela has accepted artist-in-residence positions at the École nationale supérieure d’art de Bourges, France, the Warsaw Chamber Opera theatre (both in 2014), and the Elektronmusikstudion, the national centre for Swedish electroacoustic music and sound-art based in Stockholm (in 2015). Ela has toured and made festival appearances across the UK, Europe and North America. She has also played live and had her work presented internationally in galleries such as Tate Britain. She has been commissioned to score music for TV, ﬁlm, and opera. Ela Orleans is a Ph.D. candidate in Music at the University of Glasgow, where she will expand on her subject, Apparition: The language of the archaic and decadent in the contemporary audiovisual experience.

Hologram (Augmented) Julien Lonchamp | Edinburgh, Scotland &quot;Hologram (augmented)&quot; is an acousmatic piece based on my previous piece “Hologram”, which was premiered by the Edinburgh Contemporary Music Ensemble at the Reid Hall in November 2015. “Hologram” is inspired by the holographic theory in astrophysics, which proposes that the 4-dimensional world we experience might actually be the boundary of a higher multidimensional space-time, much like a 3D holographic image works. What are the dimensions of sound and music? Can we play with them to suggest higher or hidden sonic dimensions? In the 1st movement , several musical motifs are exposed then crushed down to a single sound. In the 2nd movement, the dimensions of this single sound (pitch, timbre, rhythm, loudness) are re-introduced one by one and “perverted” using a range of processes (microtonal, spectral, polyrhythmic), while the motifs of the 1st movement are re-imagined (through mirror writing and note phasing). In the 3rd movement, the diﬀerent elements developed in the 2nd movement are combined into increasingly complex forms (through juxtaposition, superimposition and morphing). The movement eventually resolves back into our sonic world. “Hologram (augmented)” takes this approach a step further by treating the multitrack recording of “Hologram” as raw material. The recorded elements are digitally “perverted” using a range of processes (including distortion, inversion, pitch-shifting and ﬁltering). The resulting sonic elements are then used as building blocks to suggest additional sonic dimensions using a range of techniques (including repetition, superimposition, 5.1 surround spacialisation and juxtaposition). Hailing from Nancy (France), Julien studied composition at Trinity College Dublin with Donnacha Dennehy, Linda Buckley and Roger Doyle and graduated in 2008 with an MPhil in Music and Media Technologies. Since relocating to Edinburgh in 2009, Julien’s music has been performed by various orchestras, including the Edinburgh Contemporary Music Ensemble, Mr McFall’s Chamber, the Tinderbox Orchestra, the London Contemporary Chamber Orchestra and the Viridian Quartet (at Sound Thought 2012). Shortly after graduating Julien founded the Apostrophe Ensemble, a project exploring how sound and music work at the interface with other disciplines including ﬁlm, visual art or science (apostropheensemble.com). His pieces “Verso-Tempo” (2008) and “Fall of a Window Cleaner” (2011) explore live cinema performance. “Trois Fulgurances” was developed during the 2012 Scottish Composition Marathon while “Paper Dance 1” was written with the Tinderbox Orchestra in 2014. Julien is interested in creating novel immersive “sound-worlds” by combining a wide range of processes (including microtonality, spectralism and minimalism) in order to communicate abstract or complex ideas. His orchestral piece “Hologram” was premiered by the Edinburgh Contemporary Music Ensemble in 2015. Inspired by the holographic theory of modern astrophysics, “Hologram” plays with the dimensions of sound, juxtaposing/distorting them to suggest higher/hidden dimensions.

Disconnect Dara Etefaghi | University of Edinburgh | Edinburgh, Scotland ‘Disconnect’ explores algorithmic audio-visual arts. It aims to treat sound and image as a single unit and in doing so, it creates abstract relationships between them. This work is inﬂuenced by altered states and the concept of cognitive disorder. Cycles of chaos and simplicity are implemented in sound and visual design in ways that aim to take the audience on a journey in and out of complexity. The progression of these cycles are inherently unpredictable due to the nature of the processes behind them. ‘Disconnect’ uses complexity and generative composition as forms of creating sudden and drastic shifts in audio-visual systems. The management of these changes, shapes the performance and the perceived aesthetics behind these types of non-deterministic systems. Dara is an audio-visual artist, interested in complex systems and generative techniques. He is currently a PhD candidate at the University of Edinburgh. His research is focused on 3D sound and graphics. He experiments with game engines as nonlinear compositional tools and creates algorithmic ﬁlms implemented in virtual reality. 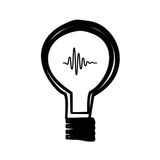