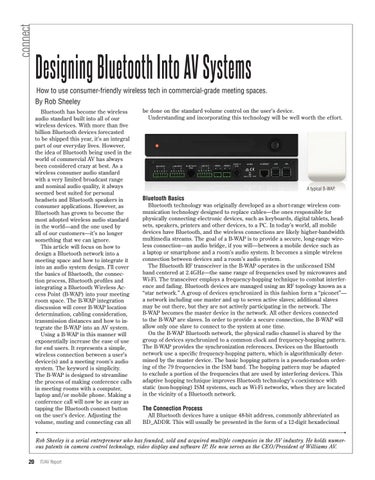 Designing Bluetooth Into AV Systems How to use consumer-friendly wireless tech in commercial-grade meeting spaces. By Rob Sheeley Bluetooth has become the wireless audio standard built into all of our wireless devices. With more than five billion Bluetooth devices forecasted to be shipped this year, it’s an integral part of our ever yday lives. However, the idea of Bluetooth being used in the world of commercial AV has always been considered crazy at best. As a wireless consumer audio standard with a ver y limited broadcast range and nominal audio quality, it always seemed best suited for personal headsets and Bluetooth speakers in consumer applications. However, as Bluetooth has grown to become the most adopted wireless audio standard in the world—and the one used by all of our customers—it’s no longer something that we can ignore. This article will focus on how to design a Bluetooth network into a meeting space and how to integrate it into an audio system design. I’ll cover the basics of Bluetooth, the connection process, Bluetooth profiles and integrating a Bluetooth Wireless Access Point (B-WAP) into your meeting room space. The B-WAP integration discussion will cover B-WAP location determination, cabling consideration, transmission distances and how to integrate the B-WAP into an AV system. Using a B-WAP in this manner will exponentially increase the ease of use for end users. It represents a simple, wireless connection between a user’s device(s) and a meeting room’s audio system. The keyword is simplicity. The B-WAP is designed to streamline the process of making conference calls in meeting rooms with a computer, laptop and/or mobile phone. Making a conference call will now be as easy as tapping the Bluetooth connect button on the user’s device. Adjusting the volume, muting and connecting can all

be done on the standard volume control on the user’s device. Understanding and incorporating this technology will be well worth the effort.

Bluetooth technology was originally developed as a short-range wireless communication technology designed to replace cables—the ones responsible for physically connecting electronic devices, such as keyboards, digital tablets, headsets, speakers, printers and other devices, to a PC. In today’s world, all mobile devices have Bluetooth, and the wireless connections are likely higher-bandwidth multimedia streams. The goal of a B-WAP is to provide a secure, long-range wireless connection—an audio bridge, if you will—between a mobile device such as a laptop or smartphone and a room’s audio system. It becomes a simple wireless connection between devices and a room’s audio system. The Bluetooth RF transceiver in the B-WAP operates in the unlicensed ISM band centered at 2.4GHz—the same range of frequencies used by microwaves and Wi-Fi. The transceiver employs a frequency-hopping technique to combat interference and fading. Bluetooth devices are managed using an RF topology known as a “star network.” A group of devices synchronized in this fashion form a “piconet”— a network including one master and up to seven active slaves; additional slaves may be out there, but they are not actively participating in the network. The B-WAP becomes the master device in the network. All other devices connected to the B-WAP are slaves. In order to provide a secure connection, the B-WAP will allow only one slave to connect to the system at one time. On the B-WAP Bluetooth network, the physical radio channel is shared by the group of devices synchronized to a common clock and frequency-hopping pattern. The B-WAP provides the synchronization references. Devices on the Bluetooth network use a specific frequency-hopping pattern, which is algorithmically determined by the master device. The basic hopping pattern is a pseudo-random ordering of the 79 frequencies in the ISM band. The hopping pattern may be adapted to exclude a portion of the frequencies that are used by interfering devices. This adaptive hopping technique improves Bluetooth technology’s coexistence with static (non-hopping) ISM systems, such as Wi-Fi networks, when they are located in the vicinity of a Bluetooth network.

All Bluetooth devices have a unique 48-bit address, commonly abbreviated as BD_ADDR. This will usually be presented in the form of a 12-digit hexadecimal

Rob Sheeley is a serial entrepreneur who has founded, sold and acquired multiple companies in the AV industry. He holds numerous patents in camera control technology, video display and software IP. He now serves as the CEO/President of Williams AV.

Topics featured in this issue include Understanding AV Over IP, 2019: The Do or Die Year for Enterprise Team Chat Solutions, The Changing Face of the Corporate Floorplan, Emerging Collaboration Technologies are Redefining Education, 8K--So Soon?, Designing Bluetooth into your AV Systems, Legal Risks for Early Adopters of Emerging Technology and more. 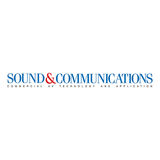