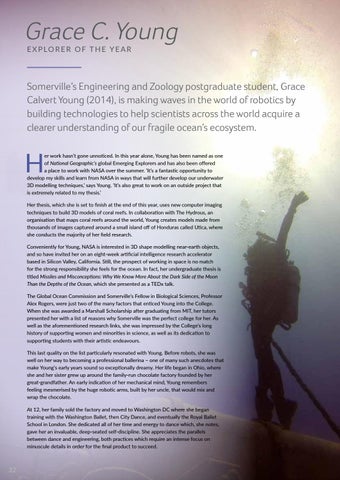 Somerville’s Engineering and Zoology postgraduate student, Grace Calvert Young (2014), is making waves in the world of robotics by building technologies to help scientists across the world acquire a clearer understanding of our fragile ocean’s ecosystem.

er work hasn’t gone unnoticed. In this year alone, Young has been named as one of National Geographic’s global Emerging Explorers and has also been offered a place to work with NASA over the summer. ‘It’s a fantastic opportunity to develop my skills and learn from NASA in ways that will further develop our underwater 3D modelling techniques,’ says Young. ‘It’s also great to work on an outside project that is extremely related to my thesis.’ Her thesis, which she is set to finish at the end of this year, uses new computer imaging techniques to build 3D models of coral reefs. In collaboration with The Hydrous, an organisation that maps coral reefs around the world, Young creates models made from thousands of images captured around a small island off of Honduras called Utica, where she conducts the majority of her field research. Conveniently for Young, NASA is interested in 3D shape modelling near-earth objects, and so have invited her on an eight-week artificial intelligence research accelerator based in Silicon Valley, California. Still, the prospect of working in space is no match for the strong responsibility she feels for the ocean. In fact, her undergraduate thesis is titled Missiles and Misconceptions: Why We Know More About the Dark Side of the Moon Than the Depths of the Ocean, which she presented as a TEDx talk. The Global Ocean Commission and Somerville’s Fellow in Biological Sciences, Professor Alex Rogers, were just two of the many factors that enticed Young into the College. When she was awarded a Marshall Scholarship after graduating from MIT, her tutors presented her with a list of reasons why Somerville was the perfect college for her. As well as the aforementioned research links, she was impressed by the College’s long history of supporting women and minorities in science, as well as its dedication to supporting students with their artistic endeavours. This last quality on the list particularly resonated with Young. Before robots, she was well on her way to becoming a professional ballerina – one of many such anecdotes that make Young’s early years sound so exceptionally dreamy. Her life began in Ohio, where she and her sister grew up around the family-run chocolate factory founded by her great-grandfather. An early indication of her mechanical mind, Young remembers feeling mesmerised by the huge robotic arms, built by her uncle, that would mix and wrap the chocolate. At 12, her family sold the factory and moved to Washington DC where she began training with the Washington Ballet, then City Dance, and eventually the Royal Ballet School in London. She dedicated all of her time and energy to dance which, she notes, gave her an invaluable, deep-seated self-discipline. She appreciates the parallels between dance and engineering, both practices which require an intense focus on minuscule details in order for the final product to succeed. 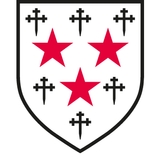 The Global Issue: The College's annual Magazine celebrates Somervillians across the Globe.

The Global Issue: The College's annual Magazine celebrates Somervillians across the Globe.