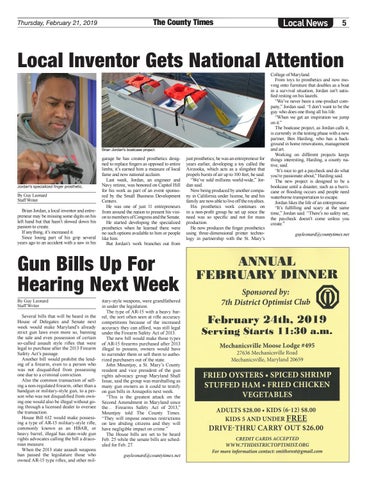 Brian Jordan, a local inventor and entrepreneur may be missing some digits on his left hand but that hasn’t slowed down his passion to create. If anything, it’s increased it. Since losing part of his grip several years ago to an accident with a saw in his

garage he has created prosthetics designed to replace fingers as opposed to entire limbs; it’s earned him a measure of local fame and now national acclaim. Last week, Jordan, an engineer and Navy retiree, was honored on Capitol Hill for his work as part of an event sponsored by the Small Business Development Centers. He was one of just 11 entrepreneurs from around the nation to present his vision to members of Congress and the Senate. He started developing the specialized prosthetics when he learned there were no such options available to him or people like him. But Jordan’s work branches out from

Several bills that will be heard in the House of Delegates and Senate next week would make Maryland’s already strict gun laws even more so, banning the sale and even possession of certain so-called assault style rifles that were legal to purchase after the 2013 Firearm Safety Act’s passage. Another bill would prohibit the lending of a firearm, even to a person who was not disqualified from possessing one due to a criminal conviction. Also the common transaction of selling a non-regulated firearm, other than a handgun or military-style gun, to a person who was not disqualified from owning one would also be illegal without going through a licensed dealer to oversee the transaction. House Bill 612 would make possessing a type of AR-15 military-style rifle, commonly known as an HBAR, or heavy barrel, illegal has state-wide gun rights advocates calling the bill a draconian measure. When the 2013 state assault weapons ban passed the legislature those who owned AR-15 type rifles, and other mil-

itary-style weapons, were grandfathered in under the legislation. The type of AR-15 with a heavy barrel, the sort often seen at rifle accuracy competitions because of the increased accuracy they can afford, was still legal under the Firearm Safety Act of 2013. The new bill would make those types of AR-15 firearms purchased after 2013 illegal to possess; owners would have to surrender them or sell them to authorized purchasers out of the state. John Mountjoy, a St. Mary’s County resident and vice president of the gun rights advocacy group Maryland Shall Issue, said the group was marshalling as many gun owners as it could to testify on gun bills in Annapolis next week. “This is the greatest attack on the Second Amendment in Maryland since the… Firearms Safety Act of 2013,” Mountjoy told The County Times. “They will impose onerous restrictions on law abiding citizens and they will have negligible impact on crime.” The House bills are set to be heard Feb. 25 while the senate bills are scheduled for Feb. 27. guyleonard@countytimes.net

just prosthetics; he was an entrepreneur for years earlier, developing a toy called the Airzooka, which acts as a slingshot that propels bursts of air up to 100 feet, he said. “We’ve sold millions world-wide,” Jordan said. Now being produced by another company in California under license, he and his family are now able to live off the royalties. His prosthetics work continues on in a non-profit group he set up since the need was so specific and not for mass production. He now produces the finger prosthetics using three-dimensional printer technology in partnership with the St. Mary’s

College of Maryland. From toys to prosthetics and now moving onto furniture that doubles as a boat in a survival situation, Jordan isn’t satisfied resting on his laurels. “We’ve never been a one-product company,” Jordan said. “I don’t want to be the guy who does one thing all his life. “When we get an inspiration we jump on it.” The boatcase project, as Jordan calls it, is currently in the testing phase with a new partner, Ben Harding, who has a background in home renovations, management and art. Working on different projects keeps things interesting, Harding, a county native, said. “It’s nice to get a paycheck and do what you’re passionate about,” Harding said. The new project is designed to be a bookcase until a disaster, such as a hurricane or flooding occurs and people need waterborne transportation to escape. Jordan likes the life of an entrepreneur. “It’s fulfilling and scary at the same time,” Jordan said. “There’s no safety net; the paycheck doesn’t come unless you create.” guyleonard@countytimes.net 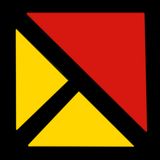