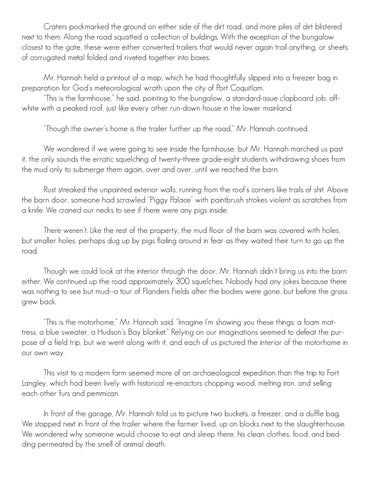 Craters pockmarked the ground on either side of the dirt road, and more piles of dirt blistered next to them. Along the road squatted a collection of buildings. With the exception of the bungalow closest to the gate, these were either converted trailers that would never again trail anything, or sheets of corrugated metal folded and riveted together into boxes. Mr. Hannah held a printout of a map, which he had thoughtfully slipped into a freezer bag in preparation for God’s meteorological wrath upon the city of Port Coquitlam. &quot;This is the farmhouse,&quot; he said, pointing to the bungalow, a standard-issue clapboard job, offwhite with a peaked roof, just like every other run-down house in the lower mainland.

We wondered if we were going to see inside the farmhouse, but Mr. Hannah marched us past it, the only sounds the erratic squelching of twenty-three grade-eight students withdrawing shoes from the mud only to submerge them again, over and over, until we reached the barn. Rust streaked the unpainted exterior walls, running from the roof’s corners like trails of shit. Above the barn door, someone had scrawled &quot;Piggy Palace&quot; with paintbrush strokes violent as scratches from a knife. We craned our necks to see if there were any pigs inside. There weren’t. Like the rest of the property, the mud floor of the barn was covered with holes, but smaller holes, perhaps dug up by pigs flailing around in fear as they waited their turn to go up the road. Though we could look at the interior through the door, Mr. Hannah didn&#39;t bring us into the barn either. We continued up the road approximately 300 squelches. Nobody had any jokes because there was nothing to see but mud--a tour of Flanders Fields after the bodies were gone, but before the grass grew back. &quot;This is the motorhome,&quot; Mr. Hannah said. &quot;Imagine I&#39;m showing you these things: a foam mattress, a blue sweater, a Hudson&#39;s Bay blanket.&quot; Relying on our imaginations seemed to defeat the purpose of a field trip, but we went along with it, and each of us pictured the interior of the motorhome in our own way. This visit to a modern farm seemed more of an archaeological expedition than the trip to Fort Langley, which had been lively with historical re-enactors chopping wood, melting iron, and selling each other furs and pemmican. In front of the garage, Mr. Hannah told us to picture two buckets, a freezer, and a duffle bag. We stopped next in front of the trailer where the farmer lived, up on blocks next to the slaughterhouse. We wondered why someone would choose to eat and sleep there, his clean clothes, food, and bedding permeated by the smell of animal death.

The second half of Soliloquies 16! Print version to be available this Fall. 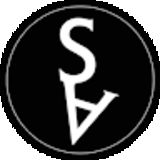