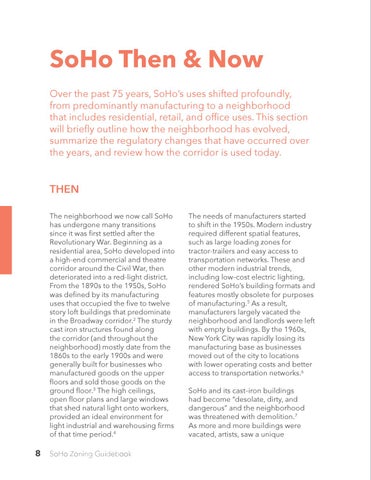 SoHo Then & Now Over the past 75 years, SoHo’s uses shifted profoundly, from predominantly manufacturing to a neighborhood that includes residential, retail, and office uses. This section will briefly outline how the neighborhood has evolved, summarize the regulatory changes that have occurred over the years, and review how the corridor is used today.

THEN The neighborhood we now call SoHo has undergone many transitions since it was first settled after the Revolutionary War. Beginning as a residential area, SoHo developed into a high-end commercial and theatre corridor around the Civil War, then deteriorated into a red-light district. From the 1890s to the 1950s, SoHo was defined by its manufacturing uses that occupied the five to twelve story loft buildings that predominate in the Broadway corridor.2 The sturdy cast iron structures found along the corridor (and throughout the neighborhood) mostly date from the 1860s to the early 1900s and were generally built for businesses who manufactured goods on the upper floors and sold those goods on the ground floor.3 The high ceilings, open floor plans and large windows that shed natural light onto workers, provided an ideal environment for light industrial and warehousing firms of that time period.4

The needs of manufacturers started to shift in the 1950s. Modern industry required different spatial features, such as large loading zones for tractor-trailers and easy access to transportation networks. These and other modern industrial trends, including low–cost electric lighting, rendered SoHo’s building formats and features mostly obsolete for purposes of manufacturing.5 As a result, manufacturers largely vacated the neighborhood and landlords were left with empty buildings. By the 1960s, New York City was rapidly losing its manufacturing base as businesses moved out of the city to locations with lower operating costs and better access to transportation networks.6 SoHo and its cast–iron buildings had become “desolate, dirty, and dangerous” and the neighborhood was threatened with demolition.7 As more and more buildings were vacated, artists, saw a unique