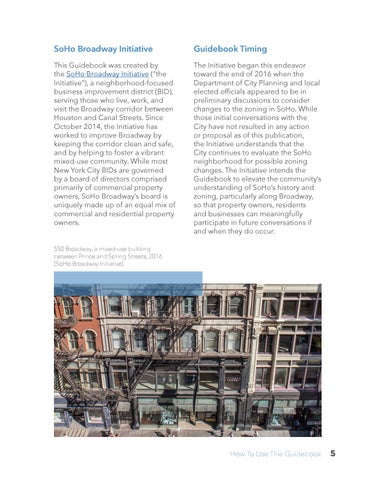 This Guidebook was created by the SoHo Broadway Initiative (“the Initiative”), a neighborhood-focused business improvement district (BID), serving those who live, work, and visit the Broadway corridor between Houston and Canal Streets. Since October 2014, the Initiative has worked to improve Broadway by keeping the corridor clean and safe, and by helping to foster a vibrant mixed-use community. While most New York City BIDs are governed by a board of directors comprised primarily of commercial property owners, SoHo Broadway’s board is uniquely made up of an equal mix of commercial and residential property owners.

The Initiative began this endeavor toward the end of 2016 when the Department of City Planning and local elected officials appeared to be in preliminary discussions to consider changes to the zoning in SoHo. While those initial conversations with the City have not resulted in any action or proposal as of this publication, the Initiative understands that the City continues to evaluate the SoHo neighborhood for possible zoning changes. The Initiative intends the Guidebook to elevate the community’s understanding of SoHo’s history and zoning, particularly along Broadway, so that property owners, residents and businesses can meaningfully participate in future conversations if and when they do occur.

How To Use This Guidebook