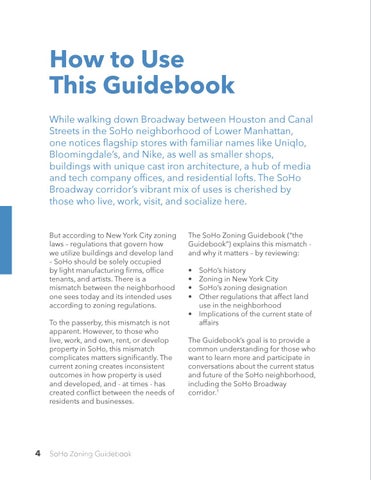 How to Use This Guidebook While walking down Broadway between Houston and Canal Streets in the SoHo neighborhood of Lower Manhattan, one notices flagship stores with familiar names like Uniqlo, Bloomingdale’s, and Nike, as well as smaller shops, buildings with unique cast iron architecture, a hub of media and tech company offices, and residential lofts. The SoHo Broadway corridor’s vibrant mix of uses is cherished by those who live, work, visit, and socialize here. But according to New York City zoning laws – regulations that govern how we utilize buildings and develop land – SoHo should be solely occupied by light manufacturing firms, office tenants, and artists. There is a mismatch between the neighborhood one sees today and its intended uses according to zoning regulations. To the passerby, this mismatch is not apparent. However, to those who live, work, and own, rent, or develop property in SoHo, this mismatch complicates matters significantly. The current zoning creates inconsistent outcomes in how property is used and developed, and - at times - has created conflict between the needs of residents and businesses.

The SoHo Zoning Guidebook (“the Guidebook”) explains this mismatch and why it matters – by reviewing: • • • •

SoHo’s history Zoning in New York City SoHo’s zoning designation Other regulations that affect land use in the neighborhood • Implications of the current state of affairs The Guidebook’s goal is to provide a common understanding for those who want to learn more and participate in conversations about the current status and future of the SoHo neighborhood, including the SoHo Broadway corridor.1

The SoHo Zoning Guidebook is an educational resource produced in collaboration with a dedicated committee of neighborhood stakeholders, urban planning consulting firm Karp Strategies and the SoHo Broadway Initiative staff.