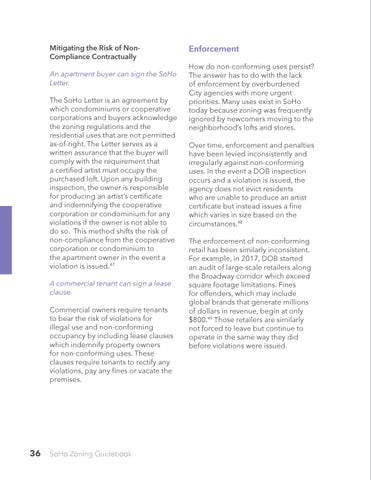 Mitigating the Risk of NonCompliance Contractually An apartment buyer can sign the SoHo Letter. The SoHo Letter is an agreement by which condominiums or cooperative corporations and buyers acknowledge the zoning regulations and the residential uses that are not permitted as-of-right. The Letter serves as a written assurance that the buyer will comply with the requirement that a certified artist must occupy the purchased loft. Upon any building inspection, the owner is responsible for producing an artistâ&#x20AC;&#x2122;s certificate and indemnifying the cooperative corporation or condominium for any violations if the owner is not able to do so. This method shifts the risk of non-compliance from the cooperative corporation or condominium to the apartment owner in the event a violation is issued.47 A commercial tenant can sign a lease clause. Commercial owners require tenants to bear the risk of violations for illegal use and non-conforming occupancy by including lease clauses which indemnify property owners for non-conforming uses. These clauses require tenants to rectify any violations, pay any fines or vacate the premises.

Enforcement How do non-conforming uses persist? The answer has to do with the lack of enforcement by overburdened City agencies with more urgent priorities. Many uses exist in SoHo today because zoning was frequently ignored by newcomers moving to the neighborhoodâ&#x20AC;&#x2122;s lofts and stores. Over time, enforcement and penalties have been levied inconsistently and irregularly against non-conforming uses. In the event a DOB inspection occurs and a violation is issued, the agency does not evict residents who are unable to produce an artist certificate but instead issues a fine which varies in size based on the circumstances.48 The enforcement of non-conforming retail has been similarly inconsistent. For example, in 2017, DOB started an audit of large-scale retailers along the Broadway corridor which exceed square footage limitations. Fines for offenders, which may include global brands that generate millions of dollars in revenue, begin at only $800.49 Those retailers are similarly not forced to leave but continue to operate in the same way they did before violations were issued.