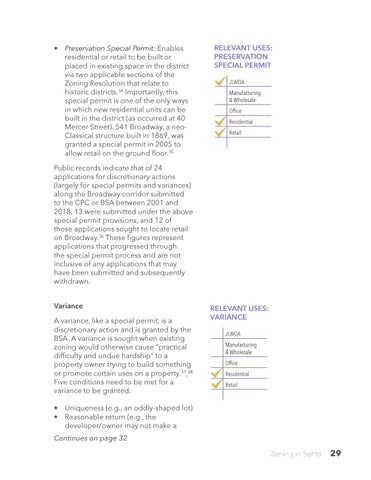 • Preservation Special Permit: Enables residential or retail to be built or placed in existing space in the district via two applicable sections of the Zoning Resolution that relate to historic districts.34 Importantly, this special permit is one of the only ways in which new residential units can be built in the district (as occurred at 40 Mercer Street). 541 Broadway, a neoClassical structure built in 1869, was granted a special permit in 2005 to allow retail on the ground floor.35

Public records indicate that of 24 applications for discretionary actions (largely for special permits and variances) along the Broadway corridor submitted to the CPC or BSA between 2001 and 2018, 13 were submitted under the above special permit provisions, and 12 of those applications sought to locate retail on Broadway.36 These figures represent applications that progressed through the special permit process and are not inclusive of any applications that may have been submitted and subsequently withdrawn. Variance A variance, like a special permit, is a discretionary action and is granted by the BSA. A variance is sought when existing zoning would otherwise cause “practical difficulty and undue hardship” to a property owner trying to build something or promote certain uses on a property.37,38 Five conditions need to be met for a variance to be granted:

• Uniqueness (e.g., an oddly-shaped lot) • Reasonable return (e.g., the developer/owner may not make a Continues on page 32 Zoning in SoHo