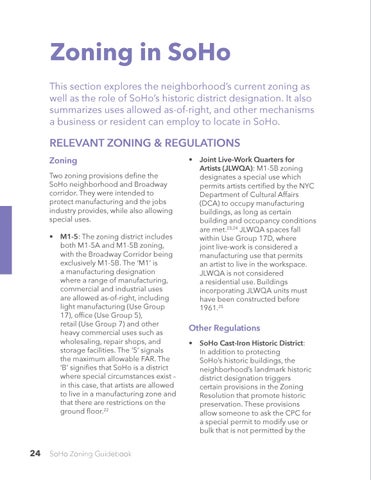 Zoning in SoHo This section explores the neighborhood’s current zoning as well as the role of SoHo’s historic district designation. It also summarizes uses allowed as-of-right, and other mechanisms a business or resident can employ to locate in SoHo.

RELEVANT ZONING & REGULATIONS Zoning Two zoning provisions define the SoHo neighborhood and Broadway corridor. They were intended to protect manufacturing and the jobs industry provides, while also allowing special uses. • M1-5: The zoning district includes both M1-5A and M1-5B zoning, with the Broadway Corridor being exclusively M1-5B. The ‘M1’ is a manufacturing designation where a range of manufacturing, commercial and industrial uses are allowed as-of-right, including light manufacturing (Use Group 17), office (Use Group 5), retail (Use Group 7) and other heavy commercial uses such as wholesaling, repair shops, and storage facilities. The ‘5’ signals the maximum allowable FAR. The ‘B’ signifies that SoHo is a district where special circumstances exist – in this case, that artists are allowed to live in a manufacturing zone and that there are restrictions on the ground floor.22

• Joint Live-Work Quarters for Artists (JLWQA): M1-5B zoning designates a special use which permits artists certified by the NYC Department of Cultural Affairs (DCA) to occupy manufacturing buildings, as long as certain building and occupancy conditions are met.23,24 JLWQA spaces fall within Use Group 17D, where joint live-work is considered a manufacturing use that permits an artist to live in the workspace. JLWQA is not considered a residential use. Buildings incorporating JLWQA units must have been constructed before 1961.25

Other Regulations • SoHo Cast-Iron Historic District: In addition to protecting SoHo’s historic buildings, the neighborhood’s landmark historic district designation triggers certain provisions in the Zoning Resolution that promote historic preservation. These provisions allow someone to ask the CPC for a special permit to modify use or bulk that is not permitted by the