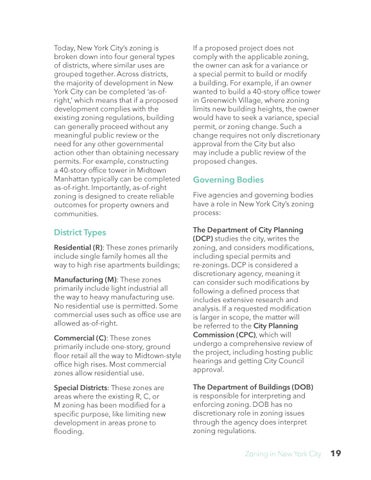 Today, New York City’s zoning is broken down into four general types of districts, where similar uses are grouped together. Across districts, the majority of development in New York City can be completed ‘as-ofright,’ which means that if a proposed development complies with the existing zoning regulations, building can generally proceed without any meaningful public review or the need for any other governmental action other than obtaining necessary permits. For example, constructing a 40-story office tower in Midtown Manhattan typically can be completed as-of-right. Importantly, as-of-right zoning is designed to create reliable outcomes for property owners and communities.

If a proposed project does not comply with the applicable zoning, the owner can ask for a variance or a special permit to build or modify a building. For example, if an owner wanted to build a 40-story office tower in Greenwich Village, where zoning limits new building heights, the owner would have to seek a variance, special permit, or zoning change. Such a change requires not only discretionary approval from the City but also may include a public review of the proposed changes.

The Department of City Planning (DCP) studies the city, writes the zoning, and considers modifications, including special permits and re-zonings. DCP is considered a discretionary agency, meaning it can consider such modifications by following a defined process that includes extensive research and analysis. If a requested modification is larger in scope, the matter will be referred to the City Planning Commission (CPC), which will undergo a comprehensive review of the project, including hosting public hearings and getting City Council approval.

Special Districts: These zones are areas where the existing R, C, or M zoning has been modified for a specific purpose, like limiting new development in areas prone to flooding.

The Department of Buildings (DOB) is responsible for interpreting and enforcing zoning. DOB has no discretionary role in zoning issues through the agency does interpret zoning regulations.