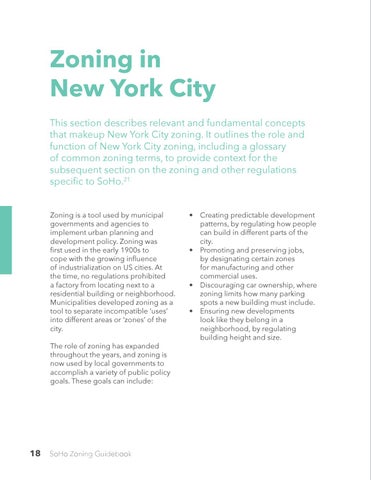 Zoning in New York City This section describes relevant and fundamental concepts that makeup New York City zoning. It outlines the role and function of New York City zoning, including a glossary of common zoning terms, to provide context for the subsequent section on the zoning and other regulations specific to SoHo.21 Zoning is a tool used by municipal governments and agencies to implement urban planning and development policy. Zoning was first used in the early 1900s to cope with the growing influence of industrialization on US cities. At the time, no regulations prohibited a factory from locating next to a residential building or neighborhood. Municipalities developed zoning as a tool to separate incompatible ‘uses’ into different areas or ‘zones’ of the city. The role of zoning has expanded throughout the years, and zoning is now used by local governments to accomplish a variety of public policy goals. These goals can include:

• Creating predictable development patterns, by regulating how people can build in different parts of the city. • Promoting and preserving jobs, by designating certain zones for manufacturing and other commercial uses. • Discouraging car ownership, where zoning limits how many parking spots a new building must include. • Ensuring new developments look like they belong in a neighborhood, by regulating building height and size.