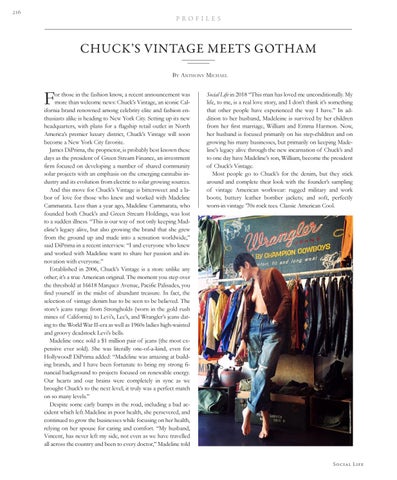 or those in the fashion know, a recent announcement was more than welcome news: Chuck’s Vintage, an iconic California brand renowned among celebrity elite and fashion enthusiasts alike is heading to New York City. Setting up its new headquarters, with plans for a flagship retail outlet in North America’s premier luxury district, Chuck’s Vintage will soon become a New York City favorite. James DiPrima, the proprietor, is probably best known these days as the president of Green Stream Finance, an investment firm focused on developing a number of shared community solar projects with an emphasis on the emerging cannabis industry and its evolution from electric to solar growing sources. And this move for Chuck’s Vintage is bittersweet and a labor of love for those who knew and worked with Madeline Cammarata. Less than a year ago, Madeline Cammarata, who founded both Chuck’s and Green Stream Holdings, was lost to a sudden illness. “This is our way of not only keeping Madeline’s legacy alive, but also growing the brand that she grew from the ground up and made into a sensation worldwide,” said DiPrima in a recent interview. “I and everyone who knew and worked with Madeline want to share her passion and innovation with everyone.” Established in 2006, Chuck’s Vintage is a store unlike any other; it’s a true American original. The moment you step over the threshold at 16618 Marquez Avenue, Pacific Palisades, you find yourself in the midst of abundant treasure. In fact, the selection of vintage denim has to be seen to be believed. The store’s jeans range from Strongholds (worn in the gold rush mines of California) to Levi’s, Lee’s, and Wrangler’s jeans dating to the World War II-era as well as 1960s ladies high-waisted and groovy deadstock Levi’s bells. Madeline once sold a $1 million pair of jeans (the most expensive ever sold). She was literally one-of-a-kind, even for Hollywood! DiPrima added: “Madeline was amazing at building brands, and I have been fortunate to bring my strong financial background to projects focused on renewable energy. Our hearts and our brains were completely in sync as we brought Chuck’s to the next level; it truly was a perfect match on so many levels.” Despite some early bumps in the road, including a bad accident which left Madeline in poor health, she persevered, and continued to grow the businesses while focusing on her health, relying on her spouse for caring and comfort. “My husband, Vincent, has never left my side, not even as we have travelled all across the country and been to every doctor,” Madeline told

Social Life in 2018 “This man has loved me unconditionally. My life, to me, is a real love story, and I don’t think it’s something that other people have experienced the way I have.” In addition to her husband, Madeleine is survived by her children from her first marriage, William and Emma Harmon. Now, her husband is focused primarily on his step-children and on growing his many businesses, but primarily on keeping Madeline’s legacy alive through the new incarnation of Chuck’s and to one day have Madeline’s son, William, become the president of Chuck’s Vintage. Most people go to Chuck’s for the denim, but they stick around and complete their look with the founder’s sampling of vintage American workwear: rugged military and work boots; buttery leather bomber jackets; and soft, perfectly worn-in vintage ’70s rock tees. Classic American Cool.

Social Life Magazine is the premier luxury publication for the Hamptons, celebrating 18 years of print. This issue features Jennifer Lopez. 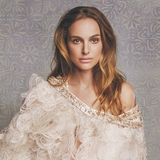