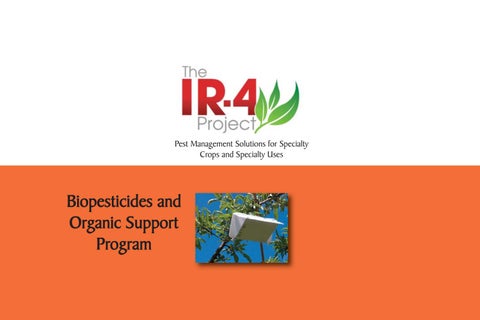 assisting growers for over

About IR-4â&amp;#x20AC;&amp;#x2122;s Biopesticide &amp; Organic Support Program The EPA classifies products as biopesticides when they are derived from natural materials such as microorganisms, plants, and certain minerals, as well as biotechnology products. The primary objective of the IR-4 Biopesticide and Organic Support Program is to further the development and registration of biopesticides for use in pest management systems for specialty crops or for minor uses on major crops. In keeping with this objective, IR-4 funds efficacy research on biopesticides and provides regulatory assistance to public sector scientists and small businesses in navigating the EPA registration process. Until 2014, the Biopesticide and Organic Support program administered grants to fund efficacy work. This shifted to a stakeholder driven process at the Biopesticide Workshop of that year; now held biennially. At this workshop, stakeholders such as growers and researchers can vote on the priority needs submitted throughout the life of the program. Several projects in the categories of fruit, organic, other, ornamental horticulture, residue mitigation, and vegetables, are funded. What follows is a development of efficacy trials with researchers and members of agribusiness across the country. Final reports are posted on the biopesticide website (http://ir4.rutgers.edu/biopesticides.html). The IR-4 Biopesticide and Organic Support program is involved in a variety of projects, such as:

Vegetable Disease Management A registration of note involves the bacteriophage of Clavibacter michiganensis subsp. Michiganensis on tomato. There is no effective alternative to control bacterial canker disease in greenhouse tomato. The growerâ&amp;#x20AC;&amp;#x2122;s only option is to prune or destroy all plants. Bacteriophage is a virus that infects specific bacteria, in this case, bacteria causing canker disease. IR-4 was instrumental in moving this project through the discovery phase, worked with a registrant that had a potential solution, funded greenhouse efficacy trials, and submitted the completed package to the EPA. Bacteriophage for the management of fireblight in organics is also under development.

Birds Cranes and other birds pull up corn and other crop seedings to eat the germinated seed. Following up on requests from the International Crane Foundation, Audubon Society, and the University of Wisconsin, the IR-4 Project has developed data needed to register anthraquinone which deters feeding and prevents damage to the crop without injury to the birds. Photo by Tom Lynn

The Arizona Cotton Research and Protection Council, a farmer-based organization worked with IR-4 to achieve the EPA Biopesticide registration of AF36. This registration on cotton and corn represents a milestone in the development and commercialization of atoxigenic strain technology for the mitigation of aflatoxin in a variety of agricultural crops.

IR-4 was requested to assist in securing an Experimental Use Permit on corn in Arizona and Texas. IR-4 helped format the information that Dr.Peter Cotty of USDA-ARS developed and submitted for a full registration. It has subsequently been registered on pistachios, almonds, and figs. The Texas Corn Growers Association has recently been involved with IR-4 on the development of 4 new strains to combat aflatoxin.

Honeybees The IR-4 Biopesticide Program has had a long history of success in obtaining registrations for managing pests in honeybees. The following is a list of products in which IR-4 played a role in their registration. Almost all in-hive

The “Best New Biopesticide” Award Giant knotweed, Reynoutria sachalinensis is native to Northern Japan where it is utilized as a local vegetable. It was later discovered in Germany. that extracts of giant knotweed could control powdery mildew and other diseases in crop plants. Dr. Hans von Amsberg formed the company KHH Bioscience and marketed the extract under the trade name Milsana®. The IR-4 Project prepared the data package and submitted the tolerance petition to EPA and registration was approved in 2005. The registration was transferred to Marrone Bio Innovations who further developed the product under the current trade name Regalia® and won the “Best New Biopesticide” Award from AGROW in 2010. Two additional active ingredients that IR-4 supported, Tobacco Mild Green Tobamovirus for management of Tropical Soda Apple, and Bacilllus mycoides Bac J for disease management, have also won this award.

and vegetables. Spinosad is a natural insecticide product produced by a microbe. IR-4 also helped obtain EPA registration for Kaolin clay which is an organic mineral coating used to protect fruit trees and ornamentals from insects and sunburn.

In the early 1990â&amp;#x20AC;&amp;#x2122;s Dr. Ralph Scorza of USDA-ARS, successfully transformed plum with the coat protein of PPV, enabling the plum to resist the virus through a process known as post-transcriptional gene silencing. USDAâ&amp;#x20AC;&amp;#x2122;s Office of Technology Transfer contacted IR-4 and asked for assistance in developing a registration package and petition for Honeysweet Plum. IR-4 and USDA met with EPA, and by June of 2007, IR-4 made a regulatory submission to the Biopesticides and Pollution Prevention Division of EPA. In May 2010, the EPA approved the registration is the first fruit tree that has gone through the full EPA process and is the first tree of any kind that has been registered solely through the efforts of governmental organizations. Similarly, IR-4 assisted the University of Florida with the registration of a papaya resistant to ringspot virus. Registrations of RNAi based pest management is another form of newer biotechnology where IR-4 has been involved.

Organic Pest Management Organic growers face many challenges and needs for pest management in organically grown crops. Weed control is one of the major problems in organic production. IR-4 submitted the registration for acetic acid (a strong form of vinegar) for weed control which Photo by Eric Johnson causes rapid drying of weed leaves (see photo). IR-4 is also responsible for major expansion of the microbial Bt onto fruits

Brown Marmorated Stinkbug Pheromones are natural scents which are used to influence insect behavior, including: the Brown Marmorated Stinkbug, Codling Moth, Carob Moth and Poplar Clearwing Moth. IR-4 in cooperation with EPA has funded on-farm demonstration projects for the use of pheromones to manage pests. IR-4 has also registered an Oriental Beetle pheromone for use in turf, ornamental crops and Photo by blueberries. An attract and kill product for Spotted Wing Steven Ausmus Drosophila is also under development.

To Learn More: visit ir4.rutgers.edu or contact Michael Braverman, Program Manager at 732.932.9575 x 4610 or braverman@aesop.rutgers.edu. This material is based upon work that is supported by the National Institute of Food and Agriculture, U.S. Department of Agriculture, under award number 201734383-27100 and the Hatch Multistate project accession number 1008823 through the New Jersey Agricultural Experiment Station Hatch Multistate project NJ27202, with substantial cooperation and support from other State Agricultural Experiment Stations, USDAARS, and USDA-FAS.