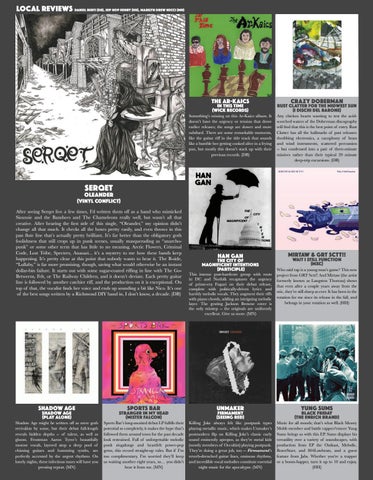 IN THIS TIME (WICK RECORDS)

RUST CLATTER FOR THE MIDWEST SUN (I DISCHI DEL BARONE)

Something’s missing on this Ar-Kaics album. It doesn’t have the urgency or tension that drove earlier releases; the songs are slower and more subdued. There are some remarkable moments, like the guitar riff in the title track that sounds like a bumble bee getting cooked alive in a frying pan, but mostly this doesn’t stack up with their previous records. (DB)

Any chicken hearts wanting to test the acidscorched waters of the Doberman discography will find that this is the best point of entry. Rust Clatter has all the hallmarks of past releases: throbbing electronics, a cacophony of brass and wind instruments, scattered percussion -- but condensed into a pair of three-minute missives rather than their typical 20 minute deep-trip excursions. (DB)

(VINYL CONFLICT) After seeing Serqet live a few times, I’d written them off as a band who mimicked Siouxsie and the Banshees and The Chameleons really well, but wasn’t all that creative. After hearing the first side of this single, “Oleander,” my opinion didn’t change all that much. It checks all the boxes pretty easily, and even throws in this pan flute line that’s actually pretty brilliant. It’s far better than the obligatory goth foolishness that still crops up in punk scenes, usually masquerading as “anarchopunk” or some other term that has little to no meaning. Arctic Flowers, Criminal Code, Lost Tribe, Spectres, Anasazi... it’s a mystery to me how these bands keep happening. It’s pretty clear at this point that nobody wants to hear it. The B-side, “Lullaby,” is far more promising, though, saving what would otherwise be an instant dollar-bin failure. It starts out with some sugar-coated riffing in line with The GoBetweens, Felt, or The Railway Children, and it doesn’t deviate. Each pretty guitar line is followed by another catchier riff, and the production on it is exceptional. On top of that, the vocalist finds her voice and ends up sounding a bit like Nico. It’s one of the best songs written by a Richmond DIY band in, I don’t know, a decade. (DB)

THE CITY OF MAGNIFICENT INTENTIONS (PARTICIPLE)

This intense post-hardcore group with roots in DC and Norfolk recaptures the urgency of prime-era Fugazi on their debut release, complete with politically-driven lyrics and harshly melodic vocals. They augment their riffs with piano chords, adding an intriguing melodic layer. The grating Jackson Browne cover is the only misstep -- the originals are uniformly excellent. Give us more. (MN)

Who said rap is a young man’s game? This new project from GRT Sctt!! And Mirtaw (the artist formerly known as Langston Thoreau) shows that even after a couple years away from the mic, they’re still sharp as ever. It has been in the rotation for me since its release in the fall, and belongs in your rotation as well. (HH)

STRANGER IN MY HEAD (MISTER FALCON)

Shadow Age might be written off as mere goth revivalists by some, but their debut full-length reveals hidden depths -- of talent, as well as gloom. Frontman Aaron Tyree’s beautifully morose vocals, layered atop a deep pool of chiming guitars and humming synths, are perfectly accented by the urgent rhythms. On lonely nights, these infectious tunes will have you pressing repeat. (MN)

Sports Bar’s long-awaited debut LP fulfills their potential so completely, it makes the hype that’s followed them around town for the past decade look restrained. Full of unforgettable melodic punk singalongs and heartfelt power-pop gems, this record straight-up rules. But if I’m too complimentary, I’m worried they’ll keep us waiting another eight years, so… you didn’t hear it from me. (MN)

Music for all moods; that’s what Black Money Mobb member and battle rapper/emcee Yung Sums brings us with this EP. Sums displays his versatility over a variety of soundscapes, with production from EP the Outkast, Melodic, BraveStarr, and 804Lowbeats, and a guest feature from Jabs. Whether you’re a trapper or a boom-bapper, turn it up to 10 and enjoy. (HH) 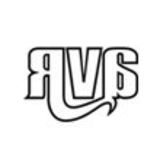