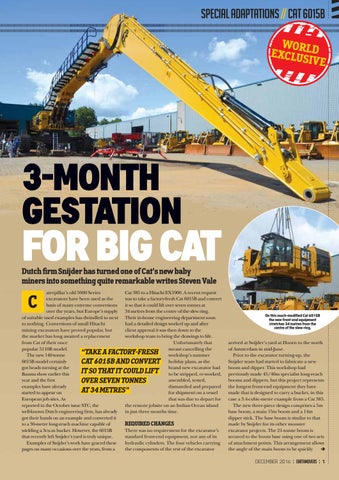 Cat 385 to a Hitachi EX1900. A recent request aterpillar’s old 5000 Series was to take a factory-fresh Cat 6015B and convert excavators have been used as the it so that it could lift over seven tonnes at basis of many extreme conversions 34 metres from the centre of the slew ring. over the years, but Europe’s supply of suitable used examples has dwindled to next Their in-house engineering department soon had a detailed design worked up and after to nothing. Conversions of small Hitachi client approval it was then down to the mining excavators have proved popular, but workshop team to bring the drawings to life. the market has long awaited a replacement Unfortunately that from Cat of their once meant cancelling the popular 5110B model. “TAKE A FACTORY-FRESH workshop’s summer The new 140-tonne 6015B model certainly CAT 6015B AND CONVERT holiday plans, as the brand new excavator had got heads turning at the IT SO THAT IT COULD LIFT to be stripped, re-worked, Bauma show earlier this assembled, tested, year and the first OVER SEVEN TONNES dismantled and prepared examples have already AT 34 METRES” for shipment on a vessel started to appear on that was due to depart for European job sites. As the remote jobsite on an Indian Ocean island reported in the October issue STC, the in just three months time. well-known Dutch engineering firm, has already got their hands on an example and converted it to a 30-metre long-reach machine capable of REQUIRED CHANGES wielding a 3cu.m bucket. However, the 6015B There was no requirement for the excavator’s that recently left Snijder’s yard is truly unique. standard front-end equipment, nor any of its Examples of Snijder’s work have graced these hydraulic cylinders. The four vehicles carrying pages on many occasions over the years, from a the components of the rest of the excavator

On this much-modified Cat 6015B the new front-end equipment stretches 34 metres from the centre of the slew ring.

arrived at Snijder’s yard at Hoorn to the north of Amsterdam in mid-June. Prior to the excavator turning-up, the Snijder team had started to fabricate a new boom and dipper. This workshop had previously made 45/46m specialist long-reach booms and dippers, but this project represents the longest front-end equipment they have made that is designed to carry a bucket, in this case a 3.4-cubic-metre example from a Cat 385. The new three-piece design comprises a 5m base boom, a main 15m boom and a 14m dipper stick. The base boom is similar to that made by Snijder for its other monster excavator projects. The 21-tonne boom is secured to the boom base using one of two sets of attachment points. This arrangement allows the angle of the main boom to be quickly 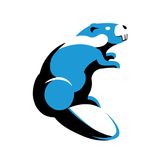