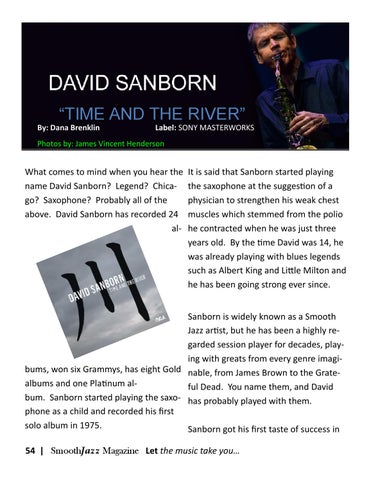 “TIME AND THE RIVER” By: Dana Brenklin

What comes to mind when you hear the name David Sanborn? Legend? Chicago? Saxophone? Probably all of the above. David Sanborn has recorded 24 al-

It is said that Sanborn started playing the saxophone at the suggestion of a physician to strengthen his weak chest muscles which stemmed from the polio he contracted when he was just three years old. By the time David was 14, he was already playing with blues legends such as Albert King and Little Milton and he has been going strong ever since.

Sanborn is widely known as a Smooth Jazz artist, but he has been a highly regarded session player for decades, playing with greats from every genre imagibums, won six Grammys, has eight Gold nable, from James Brown to the Gratealbums and one Platinum alful Dead. You name them, and David bum. Sanborn started playing the saxo- has probably played with them. phone as a child and recorded his first solo album in 1975. Sanborn got his first taste of success in 54 | SmoothJazz Magazine Let the music take you… 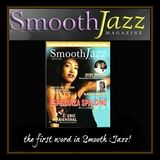