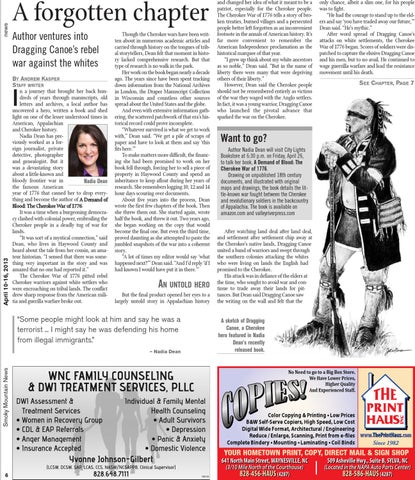 A forgotten chapter Author ventures into Dragging Canoeâ&#x20AC;&#x2122;s rebel war against the whites BY ANDREW KASPER STAFF WRITER n a journey that brought her back hundreds of years through manuscripts, old letters and archives, a local author has uncovered a hero, written a book and shed light on one of the lesser understood times in American, Appalachian and Cherokee history. Nadia Dean has previously worked as a foreign journalist, private detective, photographer and genealogist. But it was a devastating story about a little-known and bloody frontier war in Nadia Dean the famous American year of 1776 that caused her to drop everything and become the author of A Demand of Blood: The Cherokee War of 1776. It was a time when a burgeoning democracy clashed with colonial power, embroiling the Cherokee people in a deadly tug of war for lands. â&#x20AC;&#x153;It was sort of a mystical connection,â&#x20AC;? said Dean, who lives in Haywood County and heard about the tale from her cousin, an amateur historian. â&#x20AC;&#x153;I sensed that there was something very important in the story and was amazed that no one had reported it.â&#x20AC;? The Cherokee War of 1776 pitted rebel Cherokee warriors against white settlers who were encroaching on tribal lands. The conflict drew sharp response from the American militia and guerilla warfare broke out.

Though the Cherokee wars have been written about in numerous academic articles and carried through history on the tongues of tribal storytellers, Dean felt that moment in history lacked comprehensive research. But that type of research is no walk in the park. Her work on the book began nearly a decade ago. The years since have been spent tracking down information from the National Archives in London, the Draper Manuscript Collection in Wisconsin and countless other sources spread about the United States and the globe. And even with extensive information gathering, the scattered patchwork of that eraâ&#x20AC;&#x2122;s historical record could prove incomplete. â&#x20AC;&#x153;Whatever survived is what we get to work with,â&#x20AC;? Dean said. â&#x20AC;&#x153;We get a pile of scraps of paper and have to look at them and say â&#x20AC;&#x2DC;this fits here.â&#x20AC;&#x2122;â&#x20AC;? To make matters more difficult, the financing she had been promised to work on her book fell through, forcing her to sell a piece of property in Haywood County and spend an inheritance to keep afloat during her years of research. She remembers logging 10, 12 and 14 hour days scouring over documents. About five years into the process, Dean wrote the first few chapters of the book. Then she threw them out. She started again, wrote half the book, and threw it out. Two years ago, she began working on the copy that would become the final one. But even the third time, proved daunting as she attempted to paste the jumbled snapshots of the war into a coherent story. â&#x20AC;&#x153;A lot of times my editor would say â&#x20AC;&#x2DC;what happened next?â&#x20AC;&#x2122;â&#x20AC;? Dean said. â&#x20AC;&#x153;And Iâ&#x20AC;&#x2122;d reply â&#x20AC;&#x2DC;if I had known I would have put it in there.â&#x20AC;&#x2122;â&#x20AC;?

â&#x20AC;&#x153;Some people might look at him and say he was a terrorist ... I might say he was defending his home from illegal immigrants.â&#x20AC;?

Want to go? Author Nadia Dean will visit City Lights Bookstore at 6:30 p.m. on Friday, April 26, to talk her book, A Demand of Blood: The Cherokee War of 1776. Drawing on unpublished 18th century documents, and illustrated with original maps and drawings, the book details the little-known war fought between the Cherokee and revolutionary soldiers in the backcountry of Appalachia. The book is available on amazon.com and valleyriverpress.com

w After watching land deal after land deal, and settlement after settlement chip away at the Cherokeeâ&#x20AC;&#x2122;s native lands, Dragging Canoe united a band of warriors and swept through the southern colonies attacking the whites who were living on lands the English had promised to the Cherokee. His attack was in defiance of the elders at the time, who sought to avoid war and continue to trade away their lands for pittances. But Dean said Dragging Canoe saw the writing on the wall and felt that the

No Need to go to a Big Box Store. We Have Lower Prices, Higher Quality And Experienced Staff.

and changed her idea of what it meant to be a patriot, especially for the Cherokee people. The Cherokee War of 1776 tells a story of broken treaties, burned villages and a persecuted people better left forgotten as an inconvenient footnote in the annals of American history. Itâ&#x20AC;&#x2122;s far more convenient to remember the American Independence proclamation as the historical marquee of that year. â&#x20AC;&#x153;I grew up think about my white ancestors as so noble,â&#x20AC;? Dean said. â&#x20AC;&#x153;But in the name of liberty there were many that were depriving others of their liberty.â&#x20AC;? However, Dean said the Cherokee people should not be remembered entirely as victims of the war they waged with the Anglo settlers. In fact, it was a young warrior, Dragging Canoe who launched the pivotal advance that sparked the war on the Cherokee.