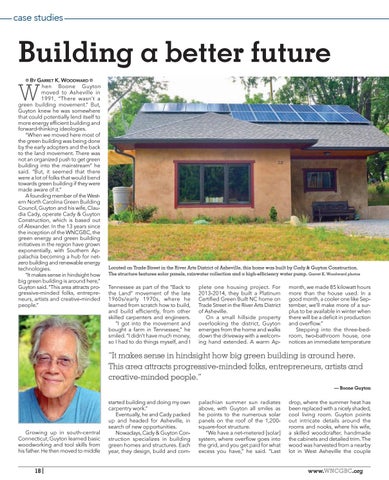 Building a better future BY GARRET K. WOODWARD p hen Boone Guyton moved to Asheville in 1991, “There wasn’t a green building movement.” But, Guyton knew he was somewhere that could potentially lend itself to more energy efficient building and forward-thinking ideologies. “When we moved here most of the green building was being done by the early adopters and the back to the land movement. There was not an organized push to get green building into the mainstream” he said. “But, it seemed that there were a lot of folks that would bend towards green building if they were made aware of it.” A founding member of the Western North Carolina Green Building Council, Guyton and his wife, Claudia Cady, operate Cady & Guyton Construction, which is based out of Alexander. In the 13 years since the inception of the WNCGBC, the green energy and green building initiatives in the region have grown exponentially, with Southern Appalachia becoming a hub for netzero building and renewable energy technologies. “It makes sense in hindsight how big green building is around here,” Guyton said. “This area attracts progressive-minded folks, entrepreneurs, artists and creative-minded people.” p

Tennessee as part of the “Back to the Land” movement of the late 1960s/early 1970s, where he learned from scratch how to build, and build efficiently, from other skilled carpenters and engineers. “I got into the movement and bought a farm in Tennessee,” he smiled. “I didn’t have much money, so I had to do things myself, and I

plete one housing project. For 2013-2014, they built a Platinum Certified Green Built NC home on Trade Street in the River Arts District of Asheville. On a small hillside property overlooking the district, Guyton emerges from the home and walks down the driveway with a welcoming hand extended. A warm Ap-

month, we made 85 kilowatt hours more than the house used. In a good month, a cooler one like September, we’ll make more of a surplus to be available in winter when there will be a deficit in production and overflow.” Stepping into the three-bedroom, two-bathroom house, one notices an immediate temperature

Growing up in south-central Connecticut, Guyton learned basic woodworking and tool skills from his father. He then moved to middle

started building and doing my own carpentry work.” Eventually, he and Cady packed up and headed for Asheville, in search of new opportunities. Nowadays, Cady & Guyton Construction specializes in building green homes and structures. Each year, they design, build and com-

palachian summer sun radiates above, with Guyton all smiles as he points to the numerous solar panels on the roof of the 1,200square-foot structure. “We have a net-metered [solar] system, where overflow goes into the grid, and you get paid for what excess you have,” he said. “Last

drop, where the summer heat has been replaced with a nicely shaded, cool living room. Guyton points out intricate details around the rooms and nooks, where his wife, a skilled woodcrafter, handmade the cabinets and detailed trim. The wood was harvested from a nearby lot in West Asheville the couple