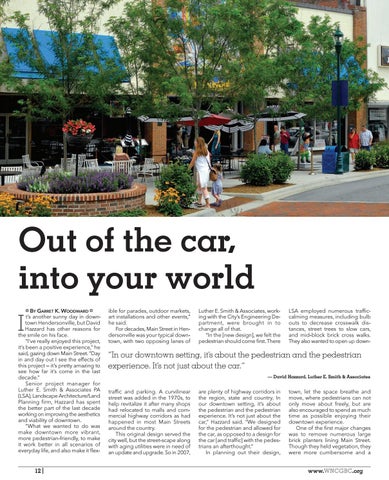 Out of the car, into your world BY GARRET K. WOODWARD p t’s another sunny day in downtown Hendersonville, but David Hazzard has other reasons for the smile on his face. “I’ve really enjoyed this project, it’s been a positive experience,” he said, gazing down Main Street. “Day in and day out I see the effects of this project — it’s pretty amazing to see how far it’s come in the last decade.” Senior project manager for Luther E. Smith & Associates PA (LSA), Landscape Architecture/Land Planning firm, Hazzard has spent the better part of the last decade working on improving the aesthetics and viability of downtown. “What we wanted to do was make downtown more vibrant, more pedestrian-friendly, to make it work better in all scenarios of everyday life, and also make it flexp

ible for parades, outdoor markets, art installations and other events,” he said. For decades, Main Street in Hendersonville was your typical downtown, with two opposing lanes of

Luther E. Smith & Associates, working with the City’s Engineering Department, were brought in to change all of that. “In the [new design], we felt the pedestrian should come first. There

traffic and parking. A curvilinear street was added in the 1970s, to help revitalize it after many shops had relocated to malls and commercial highway corridors as had happened in most Main Streets around the country. This original design served the city well, but the street-scape along with aging utilities were in need of an update and upgrade. So in 2007,

town, let the space breathe and move, where pedestrians can not only move about freely, but are also encouraged to spend as much time as possible enjoying their downtown experience. One of the first major changes was to remove numerous large brick planters lining Main Street. Though they held vegetation, they were more cumbersome and a