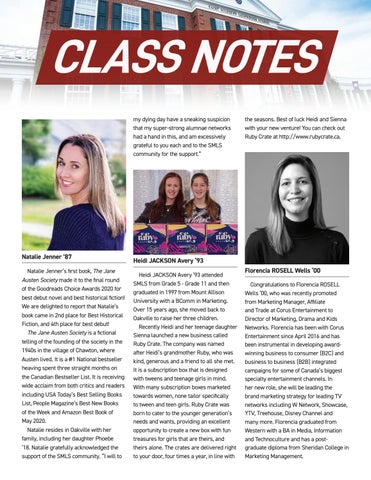 CLASS NOTES my dying day have a sneaking suspicion that my super-strong alumnae networks had a hand in this, and am excessively grateful to you each and to the SMLS community for the support.”

Natalie Jenner ’87 Natalie Jenner’s first book, The Jane Austen Society made it to the final round of the Goodreads Choice Awards 2020 for best debut novel and best historical fiction! We are delighted to report that Natalie’s book came in 2nd place for Best Historical Fiction, and 4th place for best debut! The Jane Austen Society is a fictional telling of the founding of the society in the 1940s in the village of Chawton, where Austen lived. It is a #1 National bestseller heaving spent three straight months on the Canadian Bestseller List. It is receiving wide acclaim from both critics and readers including USA Today’s Best Selling Books List, People Magazine’s Best New Books of the Week and Amazon Best Book of May 2020. Natalie resides in Oakville with her family, including her daughter Phoebe ‘18. Natalie gratefully acknowledged the support of the SMLS community. “I will to

the seasons. Best of luck Heidi and Sienna with your new venture! You can check out Ruby Crate at http://www.rubycrate.ca.

Heidi JACKSON Avery ‘93 Heidi JACKSON Avery ‘93 attended SMLS from Grade 5 - Grade 11 and then graduated in 1997 from Mount Allison University with a BComm in Marketing. Over 15 years ago, she moved back to Oakville to raise her three children. Recently Heidi and her teenage daughter Sienna launched a new business called Ruby Crate. The company was named after Heidi’s grandmother Ruby, who was kind, generous and a friend to all she met. It is a subscription box that is designed with tweens and teenage girls in mind. With many subscription boxes marketed towards women, none tailor specifically to tween and teen girls. Ruby Crate was born to cater to the younger generation’s needs and wants, providing an excellent opportunity to create a new box with fun treasures for girls that are theirs, and theirs alone. The crates are delivered right to your door, four times a year, in line with

Florencia ROSELL Wells ‘00 Congratulations to Florencia ROSELL Wells ‘00, who was recently promoted from Marketing Manager, Affiliate and Trade at Corus Entertainment to Director of Marketing, Drama and Kids Networks. Florencia has been with Corus Entertainment since April 2016 and has been instrumental in developing awardwinning business to consumer (B2C) and business to business (B2B) integrated campaigns for some of Canada’s biggest specialty entertainment channels. In her new role, she will be leading the brand marketing strategy for leading TV networks including W Network, Showcase, YTV, Treehouse, Disney Channel and many more. Florencia graduated from Western with a BA in Media, Information and Technoculture and has a postgraduate diploma from Sheridan College in Marketing Management.

Semi-annual magazine for members of the St. Mildred's-Lightbourn School community