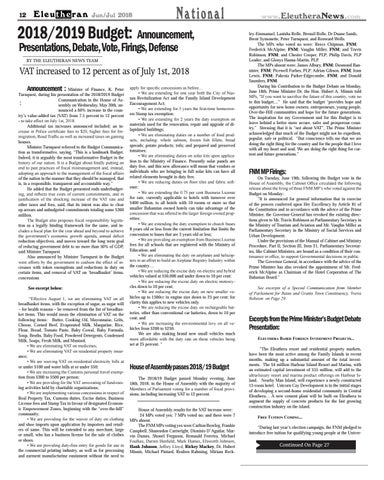 Minister of Finance, K. Peter Turnquest, during his presentation of the 2018/2019 Budget Communication in the House of As: sembly on Wednesday, May 30th, announced a 60% increase in the country’s value-added tax (VAT) from 7.5 percent to 12 percent - to take effect on July 1st, 2018. Additional tax increases announced included; an increase in Police certificate fees to $20, higher fees for Immigration, Road Traffic as well as increased taxes on gaming houses. Minister Turnquest referred to the Budget Communication as transformative, saying, “This is a landmark Budget. Indeed, it is arguably the most transformative Budget in the history of our nation. It is a Budget about finally putting an end to past practices of fiscal mismanagement and, instead, adopting an approach to the management of the fiscal affairs of the nation in the manner that they should be managed, that is, in a responsible, transparent and accountable way.” He added that the Budget presented ends underbudgeting, and reflects true costs of current commitments, and in justification of the shocking increase of the VAT rate and other taxes and fees, said, that its intent was also to clear up arrears and unbudgeted commitments totaling some $360 million. The Budget also proposes fiscal responsibility legislation as a legally binding framework for the same, and includes a fiscal plan for the year ahead and beyond to achieve the government’s economic growth agenda, annual deficit reduction objectives, and moves toward the long term goal of reducing government debt to no more than 50% of GDP, said Minister Turnquest. Also announced by Minister Turnquest in the Budget were efforts by the government to cushion the effect of increases with token exemptions and reductions in duty on certain items, and removal of VAT on ‘breadbasket’ items. concessions See excerpt below: “Effective August 1, we are eliminating VAT on all breadbasket items, with the exception of sugar, as sugar will – for health reasons – be removed from the list of breadbasket items. This would mean the elimination of VAT on the following items: Butter, Cooking Oil, Mayonnaise, Grits, Cheese, Corned Beef, Evaporated Milk, Margarine, Rice, Flour, Bread, Tomato Paste, Baby Cereal, Baby Formula, Soup, Broths, Baby Food, Powdered Detergents, Condensed Milk, Soaps, Fresh Milk, and Mustard, • We are eliminating VAT on medicines; • We are eliminating VAT on residential property insurance; • We are waiving VAT on residential electricity bills at or under $100 and water bills at or under $50; • We are increasing the Customs personal travel exemption from $300 to $500 per person; • We are providing for the VAT zero-rating of fund-raising activities held by charitable organizations; • We are implementing various concessions in respect of Real Property Tax, Customs duties, Excise duties, Business License fees and Stamp Tax in favour of designated Economic Empowerment Zones, beginning with the “over-the-hill” community; • We are providing for the waiver of duty on clothing and shoe imports upon application by importers and retailers of same. This will be extended to any merchant, large or small, who has a business license for the sale of clothes or shoes. • We are providing duty-free entry for goods for use in the commercial printing industry, as well as for processing and garment manufacturing equipment without the need to

apply for specific concessions as before… • We are extending for one year both the City of Nassau Revitalization Act and the Family Island Development Encouragement Act; • We are extending for 5 years the first-time homeowners Stamp tax exemption; • We are extending for 2 years the duty exemption on materials used for the renovation, repair and upgrade of dilapidated buildings; • We are eliminating duties on a number of food products, including: whole salmon; frozen fish fillets; bread spreads; potato products; tofu; and prepared and preserved tomatoes; • We are eliminating duties on solar kits upon application to the Ministry of Finance. Presently solar panels are duty free, and this new allowance will mean that vendors or individuals who are bringing in full solar kits can have all related elements brought in duty free. • We are reducing duties on floor tiles and fabric softener; • We are extending the 0.75 per cent Business License fee rate, currently applicable to hotels with turnover over $400 million, to all hotels with 10 rooms or more so that smaller Bahamian owned hotels can take advantage of the concession that was offered to the larger foreign owned properties; • We are extending the duty exemption to church buses 8 years old or less from the current limitation that limits the concession to buses that are 3 years old or less; • We are providing an exemption from Business License fees for all schools that are registered with the Ministry of Education; and • We are eliminating the duty on airplanes and helicopters in an effort to build an Airplane Registry Industry within the country… • We are reducing the excise duty on electric and hybrid vehicles valued at $50,000 and under down to 10 per cent; • We are reducing the excise duty on electric motorcycles down to 10 per cent; • We are reducing the excise duty on new smaller vehicles up to 1500cc in engine size down to 25 per cent; for clarity this applies to new vehicles only. • We are reducing the excise duty on rechargeable batteries, other than conventional car batteries, down to 10 per cent; and • We are increasing the environmental levy on all vehicles from $200 to $250. We are also making brand new small vehicles much more affordable with the duty rate on those vehicles being set at 25 percent. “

www. EleutheraNews . com ley-Emmanuel, Lanisha Rolle, Brensil Rolle, Dr Duane Sands, Brent Symonette, Peter Turnquest, and Renward Wells. The MPs who voted no were: Reece Chipman, FNM; Frederick McAlpine, FNM; Vaughn Miller, FNM; and Travis Robinson, FNM; and Chester Cooper, PLP; Philip Davis, PLP Leader; and Glenys Hanna-Martin, PLP. The MPs absent were: James Albury, FNM; Desmond Bannister, FNM; Picewell Forbes, PLP; Adrian Gibson, FNM; Iram Lewis, FNM; Pakesia Parker-Edgecombe, FNM; and Donald Saunders, FNM. During his Contribution to the Budget Debate on Monday, June 18th, Prime Minister Dr. the Hon. Hubert A. Minnis told MPs, “If you want to sacrifice the future of this country, vote no to this budget....” He said that the budget “provides hope and opportunity for new home owners, entrepreneurs, young people, Over-the-Hill communities and hope for the future generations. The inspiration for my Government and for this Budget is to leave behind a better more secure, safer and prosperous country.” Stressing that it is “not about VAT”, The Prime Minister acknowledged that much of the Budget might not be expedient, popular, safe or political. “But conscience tells me that we are doing the right thing for the country and for the people that I love with all my heart and soul. We are doing the right thing for current and future generations.”

On Tuesday, June 19th, following the Budget vote in the House of Assembly, the Cabinet Office circulated the following release about the firing of three FNM MP’s who voted against the Budget on Monday: “It is announced for general information that in exercise of the powers conferred upon Her Excellency by Article 81 of the Constitution and in accordance with the advice of the Prime Minister, the Governor-General has revoked the existing directions given to Mr. Travis Robinson as Parliamentary Secretary in the Ministry of Tourism and Aviation and Mr. Vaughn Miller as Parliamentary Secretary in the Ministry of Social Services and Urban Development. Under the provisions of the Manual of Cabinet and Ministry Procedure, Part II, Section III, Item 21, Parliamentary Secretaries, like Cabinet Ministers, are bound as a condition of their continuance in office, to support Governmental decisions in public. The Governor General, in accordance with the advice of the Prime Minister has also revoked the appointment of Mr. Frederick McAlpine as Chairman of the Hotel Corporation of The Bahamas Board.” See excerpts of a Special Communication from Member of Parliament for Bains and Grants Town Constituency, Travis Robsion on Page 29.

Excerpts from the Prime Minister’s Budget Debate Presentation: Eleuthera Based Foreign Investment Projects... “The Eleuthera resort and residential property markets, have been the most active among the Family Islands in recent months, making up a substantial amount of the total investments. The $4 million Harbour Island Resort and Marina, with an estimated capital investment of $55 million, will add to the ultra-luxury resort and marina product offerings on Harbour Island. Nearby Man Island, will experience a newly constructed 15-room hotel. Unicorn Cay Development is in the initial stages of developing a second-home residential community in Central Eleuthera… A new cement plant will be built on Eleuthera to augment the supply of concrete products for the fast growing construction industry on the island. Free Tuition Coming... “During last year’s election campaign, the FNM pledged to introduce free tuition for qualifying young people at the Univer-

The Eleutheran Newspaper, published monthly in print and daily online at www.EleutheraNews.com, covering all of Eleuthera, Harbour Island and Spanish Wells, Bahamas with the latest in news, events, community, business, opinion, sports and more. Contact us at 1-242-422-9350. 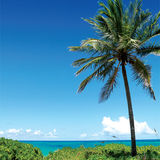