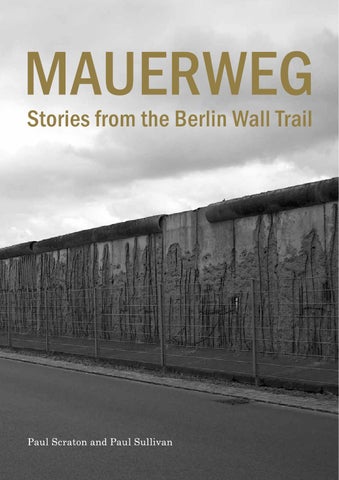 Authors Paul Scraton & Paul Sullivan Book design by Julia Stone Map by Katrin Hagen Photography by Paul Sullivan All rights reserved. This book or any portion thereof may not be reproduced or used in any manner whatsoever with­out the express written permission of the publisher except for the use of brief quotations in a book review. MAUERWEG – Stories from the Berlin Wall Trail © 2014 Slow Travel Berlin ISBN 978-0-9910111-1-7 www.slowtravelberlin.com contact@slowtravelberlin.com

In the months and years that followed the fall of the Berlin Wall on 9th Nov­ ember 1989, the vast majority of the border fortifications were removed due to an understandable desire to rid the city of all traces of the hated structure. And yet, in many ways, the dividing line never really went away, whether in terms of architecture or attitudes, voting patterns or even average salaries. The differences between Ossis and Wessis continued to be a topic of much discussion and debate, long after political reunification. “The Wall” also remains in a physical, albeit abstracted sense, in the shape of the 160-kilometre cycling and hiking trail known as the Mauerweg (Berlin Wall Trail), which follows the entire route of the former border between West and East. As long-term residents of Berlin and history aficionados, we have both been intrigued by the Wall’s past and its continued influence on the city. So in the course of 2014, we decided to walk the entire length of the Mauerweg. Our journeys were made separately and for different but overlapping reasons, ranging from our mutual love of an elaborate stroll to a common desire to mark the twenty-fifth anniversary of the fall of the Wall. This book collates our respective impressions and experiences in the form of two separate but interlocking essays, both illustrated by full-colour photo­ graphs. The emphasis throughout is on the fascinating stories we encountered: the tragic deaths and spectacular escapes of the past, as well as exclusive interviews with Berliners who experienced the Wall first-hand. But you will also find stories that explore the Wall’s continued influence on the city, either side of the old dividing line. Paul Scraton and Paul Sullivan November 2014

By Paul Scraton In the south east of Berlin, between the districts of Treptow and Neukölln, the path of the Berlin Wall ran down the middle of the Britzer Zweigkanal, part of the network of waterways developed during the nineteenth century as part of the massive industrial growth of the city. Nowadays it is a strange, in-between kind of place, one of t­ hose edgeland spaces that is nei­ ther city nor country, with allotment gardens and fields on one side of the canal, and factories, workshops and warehouses on the other. The air here is often filled with competing smells; the flowers of the wild grasses and hedgerows that escaped the council strimmer; coffee roasting in an industrial plant across the water; the smoke from a bonfire. Across the canal from the coffee factory stands a steel memorial set back from the path. Designed by the artist Karl Biedermann, it was erected to mark the spot where a young man, Chris Gueffroy, was killed in February 1989, attempting to escape across the Berlin Wall. Gueffroy was just twenty when he died, the last person to be killed by the GDR government’s infamous ‘shoot-tokill’ order at the border. There were many reasons why people were so

desperate to leave the German Democratic Republic that they were willing to risk their lives attempting to cross the barbed wire and con­ crete, and Chris Gueffroy’s was fairly straightforward and common: he wanted to see the world. His mother Karin, talking to NBC News fifteen years after her son’s death, explained how his attitude towards the system under which he was living had developed from an early age: “At age 12 or 13, Chris watched political TV shows from the west and always told me that one day, he will travel to America, his dream country … I was startled by his remarks and replied that he will not be able to leave East Germany, that it will never work… ‘Why not Mom? They cannot always decide everything for me, for all of us, from birth to death.’” [1] Despite being an excellent athlete as a schoolboy, Chris Gueffroy refused to follow the expected career route and become an officer in the East German Army, which led to him being banned from attending university. Instead he became a waiter, working in various restaurants where he excelled at his job and earned well; but his disillusionment

remained. With a friend he made plans to escape, tragically making an error that would cost him his life: “The two young men chose not to submit an application for an exit visa to leave East Germany. They feared the harassment at work and in their personal lives that usually accompanied such a move. When they heard from friends that the order to shoot fugitives at the border had been lifted, they became convinced that they should try to flee over the Wall to West Berlin.” [2] The order had not been lifted. Border guards discovered the two young men when they set off an alarm wire. The guards opened fire, and Chris Gueffroy was fatally wounded. His friend was injured, arrested and sent to prison, before being ‘bought’ free by the West German government in October 1989. Chris Gueffroy’s story does not end with his terrible death in the noman’s land on the banks of the Britzer Zweigkanal. Over the months that followed his killing, and after hundreds turned up for his funeral, the scale of the protests and the diplomatic pressure would force the hand of East German leader Erich Honecker and the regime. On 3rd April 1989, Honecker revoked the ‘shoot-to-kill’ order (whose existence had so often been denied), and it would not be restored. Looking back on it now, it is clear in the reaction of the authorities to Chris Gueffroy’s

death that the tide was turning in the GDR. The regime was on its last legs. or 28 years, from the 13th August 1961 until the 9th November 1989, the Berlin Wall “stood proud and ugly, with its sturdy blocks, its spikes and fences and alarms and watchtowers, seemingly permanent and impregnable.”  [3] It divided the city, completely encircling West Berlin and thereby cutting it off not only from the eastern half of the city, but the surrounding countryside as well. In that time it developed from a rolled out stretch of barbed-wire guarded by armed guards to a highly-fortified structure of concrete, wire, dog runs, anti-tank traps. Official figures record more than 130 deaths at the border during its existence, but its very presence shaped, damaged and destroyed the lives of millions more. It was the most visible representation of Churchill’s Iron Curtain, the dividing line between East and West, Communism and Capitalism, Totalitarianism and Democracy – at least according to the rhetoric batted back and forth across the Cold War divide. Over the course of one night in November 1989, the first holes in the Wall finally began to appear. The Iron Curtain had been breached before, but it was the fall of the Berlin Wall that would become most symbolic of the collapse of communism

in Europe. Eleven months on, Germany was reunified and much of the infamous structure had been chiselled, hammered and taken away as souvenirs. Some was sold, via Monte Carlo auction houses, and now stands outside schools, libraries and other municipal buildings around the world. Other sections were piled up in railway yards and on the edge of graveyards, where the natural world quickly swallowed them, as if assisting the German people in ridding all traces of it forever. And indeed, in those first months and years it was clear that the majority of people wanted it gone: “Take it away! Fill in the gaps! Mauer... weg!” But there were other voices too, that went against the crowd. One belonged to a Green Party politician called Michael Cramer, who saw in what remained of the border fortifications – not least the old patrol road for the border guards – a potentially important site of remembrance, as well as a means to encourage Berliners to, quite literally, get on their bikes. He proposed transforming the 160-kilometre of border into a cycling and hiking path so that it could be both a site of memory and a place of recreation. It took Cramer and his small band of supporters almost a decade to persuade the Berlin authorities of his plan, but they eventually saw the sense in it and, in 2001, work began on formalising the Berlin Wall Trail. The re-laying

of pathways and installation of sign­ posts, information boards and memorial sites cost ten million Euros and took three years, but by 2004, the Berliner Mauerweg was open, just in time for the 15th anniversary of the fall of the Wall. Five years later, in an interview to mark the next major anniversary, Michael Cramer set out the impor­ tance of the Berlin Wall Trail as he saw it: “The trail is to help Berlin come to terms with the past. It’s a reminder not only of the division, but also of how the Wall was peacefully swept away in 1989.” [4] For those who have spent time on the trail, whether walking, running or cycling, attempting the route in its entirety or making a certain stretch part of our daily routine, the Berlin Wall Trail offers many things. It is a place of leisure and recreation. It is a memorial site in its entirety, but is also punctuated with hundreds of smaller, more personal sites of memory, such as that for Chris Gueffroy. Whether we follow the trail through the centre of the city, or where Berlin rubs up against the Brandenburg countryside, or through the edge­lands in between, we not only discover stories from the past but also, through the stories of the present, understand the contemporary city a little more.

Which side of the Wall did you grow up on? (Both) East.

What was the worst thing about living under the GDR? (Her) Not being able to travel. There were only a few countries you could go to... Poland, Russia Czechoslovakia, Hungary... although it’s also hard to travel these days too if you don’t have the money.

What about the lack of freedom of speech? Didn‘t you have to be careful what you said? (Her) We lived in the countryside, so for us that wasn’t really the case. Maybe if you lived right in the city you had to be careful...

Is life better now? (Him) Life was good then because many things were just easier. But it’s also good now. We’re retired so we have lots of time on our hands to enjoy the city, take bike rides together at weekends. We have a boat too... so no, we can’t complain...

Mauerweg: Stories from the Berlin Wall Trail brings together two separate walks around the entire 160km length of the former Berlin Wall Trail in the shape of a pair of interlocking essays and 18 full colour photos. The emphasis throughout is on the Wallâ&#x20AC;&#x2122;s fascinating stories: the tragic deaths and spectacular escapes of the past, exclusive interviews with Berliners who experienced the Wall first-hand, and the various ways in which the Wall continues to shape the contemporary city.