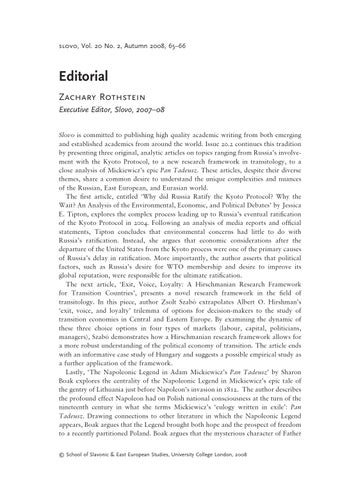 Editorial Zachary Rothstein Executive Editor, Slovo, 2007–08 Slovo is committed to publishing high quality academic writing from both emerging and established academics from around the world. Issue 20.2 continues this tradition by presenting three original, analytic articles on topics ranging from Russia’s involvement with the Kyoto Protocol, to a new research framework in transitology, to a close analysis of Mickiewicz’s epic Pan Tadeusz. These articles, despite their diverse themes, share a common desire to understand the unique complexities and nuances of the Russian, East European, and Eurasian world. The first article, entitled ‘Why did Russia Ratify the Kyoto Protocol? Why the Wait? An Analysis of the Environmental, Economic, and Political Debates’ by Jessica E. Tipton, explores the complex process leading up to Russia’s eventual ratification of the Kyoto Protocol in 2004. Following an analysis of media reports and official statements, Tipton concludes that environmental concerns had little to do with Russia’s ratification. Instead, she argues that economic considerations after the departure of the United States from the Kyoto process were one of the primary causes of Russia’s delay in ratification. More importantly, the author asserts that political factors, such as Russia’s desire for WTO membership and desire to improve its global reputation, were responsible for the ultimate ratification. The next article, ‘Exit, Voice, Loyalty: A Hirschmanian Research Framework for Transition Countries’, presents a novel research framework in the field of transitology. In this piece, author Zsolt Szabó extrapolates Albert O. Hirshman’s ‘exit, voice, and loyalty’ trilemma of options for decision-makers to the study of transition economies in Central and Eastern Europe. By examining the dynamic of these three choice options in four types of markets (labour, capital, politicians, managers), Szabó demonstrates how a Hirschmanian research framework allows for a more robust understanding of the political economy of transition. The article ends with an informative case study of Hungary and suggests a possible empirical study as a further application of the framework. Lastly, ‘The Napoleonic Legend in Adam Mickiewicz’s Pan Tadeusz’ by Sharon Boak explores the centrality of the Napoleonic Legend in Mickiewicz’s epic tale of the gentry of Lithuania just before Napoleon’s invasion in 1812. The author describes the profound effect Napoleon had on Polish national consciousness at the turn of the nineteenth century in what she terms Mickiewicz’s ‘eulogy written in exile’: Pan Tadeusz. Drawing connections to other literature in which the Napoleonic Legend appears, Boak argues that the Legend brought both hope and the prospect of freedom to a recently partitioned Poland. Boak argues that the mysterious character of Father © School of Slavonic &amp; East European Studies, University College London, 2008 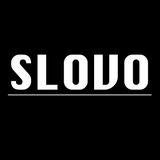