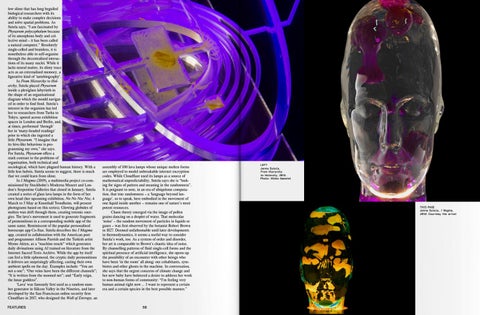 low slime that has long beguiled biological researchers with its ability to make complex decisions and solve spatial problems. As Sutela says, “I am fascinated by Physarum polycephalum because of its amorphous body and collective mind – it has been called a natural computer.” Resolutely single-celled and brainless, it is nonetheless able to self-organise through the decentralised interactions of its many nuclei. While it lacks neural matter, its slimy trace acts as an externalised memory, a figurative kind of ‘autobiography’. In From Hierarchy to Holarchy, Sutela placed Physarum inside a plexiglass labyrinth in the shape of an organisational diagram which the mould navigated in order to find food. Sutela’s interest in the organism has led her to researchers from Turku to Tokyo, spored across exhibition spaces in London and Berlin, and, at times, performed ‘through’ her in ‘many-headed readings’ prior to which she ingested a little Physarum. “I imagine that its hive-like behaviour is programming my own,” she says. For Sutela, Physarum offers a stark contrast to the problems of organisation, both technical and sociological, which have plagued human history. With a little less hubris, Sutela seems to suggest, there is much that we could learn from slime. In I Magma (2019), a multimedia project co-commissioned by Stockholm’s Moderna Museet and London’s Serpentine Galleries that closed in January, Sutela created a series of glass lava lamps in the form of her own head (her upcoming exhibition, No No Nse Nse, 4 March to 3 May at Kunsthall Trondheim, will present photograms based on this series). Glowing globules of molten wax drift through them, creating totemic energies. The lava’s movement is used to generate fragments of premonitions in a corresponding mobile app of the same name. Reminiscent of the popular personalised horoscope app Co-Star, Sutela describes the I Magma app, created in collaboration with the American poet and programmer Allison Parrish and the Turkish artist Memo Akten, as a “machine oracle” which generates daily divinations using AI trained on literature from the Internet Sacred Texts Archive. While the app by itself can feel a little ephemeral, the cryptic daily premonitions it delivers are surprisingly affecting, casting their own ambient spells on the day. Examples include: “You are not a one”; “Our veins have been the different channels”; “It is written from the mooned net”; and “Early reign, the lunar goddess”. ‘Lava’ was famously first used as a random number generator in Silicon Valley in the Nineties, and later developed by the San Franciscan online security firm Cloudflare in 2017, who designed the Wall of Entropy, an FEATURES

assembly of 100 lava lamps whose unique molten forms are employed to model unbreakable internet encryption codes. While Cloudflare used its lamps as a source of mathematical unpredictability, Sutela says she is “looking for signs of pattern and meaning in the randomness”. It is poignant to note, in an era of ubiquitous computation, that true randomness – a ‘language beyond language’, so to speak, here embodied in the movement of one liquid inside another – remains one of nature’s most potent resources. Chaos theory emerged via the image of pollen grains dancing on a droplet of water. That molecular ‘noise’ – the random movement of particles in liquids or gases – was first observed by the botanist Robert Brown in 1827. Deemed unfathomable until later developments in thermodynamics, it seems a useful way to consider Sutela’s work, too. As a system of order and disorder, her art is comparable to Brown’s chaotic idea of noise. By channelling patterns of fluid single-cell forms and the spiritual presence of artificial intelligence, she opens up the possibility of an encounter with other beings who have been ‘in the room’ all along: our cohabitants, symbiotes and other ghosts in the machine. In conversation, she says that the urgent concerns of climate change and her new baby have bolstered a desire to address her work to non-human forms of community: “I’m feeling very human animal right now ... I want to represent a certain era and a certain species in the best possible manner.”

THIS PAGE Jenna Sutela, I Magma, 2019. Courtesy the artist

For our first issue of the new decade, we wanted to put the concept of glamour under the microscope. It feels normal now to see a glamorous woman in fake nails and fashion that doesn’t attempt to look ‘dressed down’ talk about grooming and current affairs, but a decade ago, it wasn’t a combination of characteristics that many mainstream fashion publications endorsed. If you were born in the mid-Eighties, there was a real feeling that dressing up and indulging in glamour made you frivolous – something that negated intellect. Over the last few years, behaviours have changed and a new generation has transformed its attitude to glamour: now, people see it as an attribute, a platform or just something to enjoy. To gain a greater understanding about this shift in perception we selected a group of artists, photographers and writers to pick apart the theme of glamour.