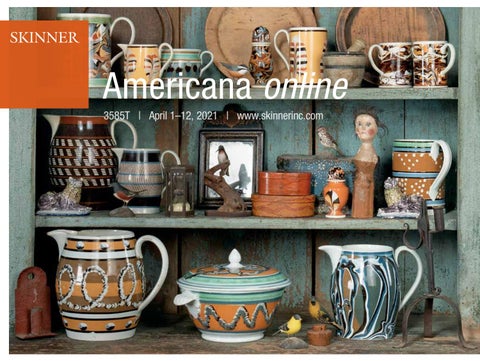 The Judi & Cy Stellmach Americana Collection We are pleased to offer this interesting and colorful collection of 18th century household items and early painted furniture—from unusual early lighting and treen to early glass and textiles—treasures abound!

Fraktur Colorful and playful, and often biographical, religious, or historical, American fraktur—drawn in ink and painted in watercolor by artisans in the late 18th and early 19th century—have long been popular among collectors. They are most often associated with (and collected in) the Middle Atlantic states, having been popularized in that region by Pennsylvania Germans in the mid18th century. The art form and its practitioners spread to Virginia, Ohio, and even Canada over the following several decades. One of the two examples shown here is from Baltimore County, Maryland. Fraktur are so-named because of the use of a particular kind of medieval German calligraphy and resultant typefaces, all also referred to as fraktur (meaning broken or fractured script). Like a lot of folk art, fraktur often have associations with individual accomplishments, awards, events, births, marriages, and deaths—a way for a family to memorialize an important time or occurrence. In practice, fraktur artists (some of whom are known not by name but through the style and specific characteristics of their work) used flowers, vines, figures, birds, and abstractions, as well as lines of fastidious calligraphy, to acknowledge and celebrate those social rites.

Revere Silver Paul Revere Jr. (1734-1818) was one of early Boston’s most prolific silversmiths and engravers. He was a skilled and versatile craftsman producing during his career over 5,000 items in about ninety different forms varying from thimbles and buttons to elaborate tea sets, flatware, and even surgeon’s instruments. As an engraver he produced bookplates, plates for printing currency, and illustrations. His best known engraving, The Bloody Massacre, depicts the Boston Massacre of March 5, 1770. His shop’s finely crafted pieces have been highly sought after and prized for generations. Silver from his shop seldom appears at auction and much of his work is preserved in museum collections. This tablespoon, engraved with a boar’s head crest on a bright-cut handle, is one of a handful of surviving Revere spoons that have been associated with the Spooner family. The back of the handle is boldly stamped “REVERE.” Two lifelong collections from Connecticut built over decades give the sale a decidedly rural and 18th century streak – the Judi & Cy Stellma...

Two lifelong collections from Connecticut built over decades give the sale a decidedly rural and 18th century streak – the Judi & Cy Stellma...