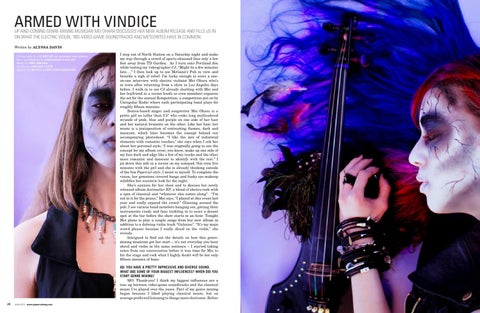 UP-AND-COMING GENRE-MIXING MUSICIAN MEI OHARA DISCUSSES HER NEW ALBUM RELEASE AND FILLS US IN ON WHAT THE ELECTRIC VIOLIN, ‘90S-VIDEO-GAME SOUNDTRACKS AND METEORITES HAVE IN COMMON. Written by ALYSSA DAVIS Photography by CJ BRYAN of invisible girl studio Hair and Makeup by ASHLEIGH TAYLOR Model by MEI OHARA Jewelry by SKILER LOVE Apparel by MONICA KITCHEN DESIGNS

I step out of North Station on a Saturday night and make my way through a crowd of sports-obsessed fans only a few feet away from TD Garden. As I turn onto Portland Ave while texting my videographer CJ, “Might be a few minutes late…,” I then look up to see McGann’s Pub in view and breathe a sigh of relief. I’m lucky enough to score a oneon-one interview with electric violinist Mei Ohara who’s in town after returning from a show in Los Angeles days before. I walk in to see CJ already chatting with Mei and her boyfriend in a corner booth as crew members organize the set for the annual Rompetition, a competition put on by Unregular Radio where each participating band plays for roughly fifteen minutes. Boston-based singer and songwriter Mei Ohara is a petite girl no taller than 5’4” who rocks long multicolored strands of pink, blue and purple on one side of her hair and her natural brunette on the other. Like her hair, her music is a juxtaposition of contrasting themes, dark and innocent, which later becomes the concept behind our accompanying photoshoot. “I like the mix of industrial elements with romantic touches,” she says when I ask her about her personal style, “I was originally going to use the concept for my album cover, you know, make up one side of my face dark and edgy like a few of my tracks and the other more romantic and innocent to identify with the rest.” I jot down this info in a corner on my notepad. Not even five minutes with the girl and she is already thinking outside of the box Papercut-style, I muse to myself. To complete the vision, her gemstone covered bangs and funky eye makeup solidifies her eccentric look for the night. She’s anxious for her show and to discuss her newly released album Antimatter EP, a blend of electro-rock with a spin of classical and “whatever else comes along”. “I’m not in it for the prizes,” Mei says, “I played at this event last year and really enjoyed the crowd.” Glancing around the pub, I see various band members hanging out, getting their instruments ready and fans trickling in to score a decent spot at the bar before the show starts in an hour. Tonight Mei plans to play a couple songs from her new album in addition to a dubstep violin track “Galaxies”. “It’s my main crowd pleaser because I really shred on the violin,” she reveals. Intrigued to find out the details on how this genremixing musician got her start – it’s not everyday you hear shred and violin in the same sentence – I started taking notes from our conversation before it was time for Mei to hit the stage and rock what I highly doubt will be her only fifteen minutes of fame. AD: YOU HAVE A PRETTY IMPRESSIVE AND DIVERSE SOUND. WHAT ARE SOME OF YOUR BIGGEST INFLUENCES? WHEN DID YOU START GENRE MIXING? MO: Thank-you! I think my biggest influences are a toss up between video-game soundtracks and the classical music I've played over the years. Part of my genre mixing began because I liked playing classical music, but on average preferred listening to things more electronic. Before

pursuing my solo career I did a little bit of semi-classical writing. I couldn't reproduce true classical music, so once I started writing I was unintentionally mish-mashing genres. Now I embrace what comes most naturally to me. AD: HOW DID YOU GET STARTED PLAYING THE ELECTRIC VIOLIN? MO: I began studying classical violin when I was six and finished up my Bachelor’s degree in classical music last spring. I got my first electric violin while still in high school, not expecting to do much more than fool around on it. The following year, I started playing with my friend’s band and soon enough I was hooked. AD: DO YOU COME FROM A MUSICAL FAMILY? MO: My father is a scientist but once upon a time worked as a piano tuner. Both my mother and sister studied piano as I did, but I switched after a few years to the violin because I felt the sound was more human and organic. While I don't have a family of professional musicians, they all understand the art of creating music and support my decision to pursue it. AD: TAKE ME THROUGH THE TRACKS ON YOUR FIRST ALBUM. DO YOU SEE AN ONGOING THEME OR DOES IT VARY? MO: It opens up with a personal industrial-style track “Antimatter Man” that uses electric violin and vocals. The second track “Touch Upon Request” is my first single and a song of sexual frustration. It’s catchy and the easiest to identify with. I usually write in a more poetic style but this track is raw and the writing just flowed. There aren’t a whole lot of lyrics but the point of the song is the feeling of frustration while screaming, “I need a connection!” The third track “Scattered” is about questioning the game of life, people trying to pretend to be mature and pretending to understand love and experiences. The fourth and the fifth tracks are about regaining self identity. I went through a relationship that destroyed my sense of who I was. I channeled the urgency of wanting to just live my life, be self aware and make my own decisions. Five tracks down, she pauses and I have to ask, “What about the last track “Never Beam Again?” Her face lights up and she laughs, “I’m a huge space nerd, I’m really into astronomy! The meteorite that recently came into the atmosphere was so exciting. It’s totally my thing. Since all of the other tracks are personal and human, I wanted to write a song about a vaster topic. 'Never Beam Again' is a depressing track that tells the story of a star that’s burning out. It describes how it reflects off the remains of the rest of the universe. Sometimes when I write a song, it seems to write itself, and this one really came out of me purely and naturally.” AD: SOUNDS LIKE IT CAN BE EASY TO GET LOST IN THE MUSIC. MO: Usually when I first complete a new song, it feels like something I needed to hear, so I get really caught up in it. Also, in live shows there will be those moments when a certain feeling in my heart fights to the surface because of a specific song. AD: THE PAST YEAR YOU’VE PLAYED IN BOSTON AND CALIFORNIA, ANY PLANS TO HIT UP ANY OTHER CITIES? MO: The show that I recently played was in Santa Monica, which is one of the parts of LA that I personally like. It was the same night of the Grammys but I was impressed with the crowd. The venue Trip also seemed to be very accepting of bands from out of town and I met a 22

Seattle-based band who was doing a little west coast tour too. Last October, I played in the California desert for a conference called Interfusion Music Summit. I was on a stage outside. It was over 100 F and in the distance you could see the desert mountains, probably one of the craziest shows thus far. I've also played in NYC and DC and may return to one or both this year. I want to play Philly, Austin and really any city that will have me! I studied violin for a few months in London and want so badly to go back and play there. I also feel a blood obligation to play in Japan (my mom is from Tokyo). AD: WHAT CAN PEOPLE EXPECT FROM YOUR LIVE SHOW? MO: It's just me on stage, and I switch between singing and keyboards to shredding on my violin. I like to change it up. Sometimes I will dress up and head bang my hats and feather hair pieces off my head. Speaking of feathers, I think Vindice, my electric violin, is quite the eye candy. AD: WHAT IS YOUR FAVORITE THING TO SEE IN THE AUDIENCE WHILE YOU ARE ON STAGE? MO: When anyone starts really moving I feel like I'm not alone on stage. One time someone at a show in a bar started doing the robot, which made me feel like I was at least doing something right! I also love seeing the reactions when I break out the violin. AD: WHO WOULD YOU WANT TO DO A DUET WITH? MO: In a dream world, I want so much to be able to work with Dave Gahan or Martin Gore of Depeche Mode. Both have amazing voices, and are inspirational to me as an electronic artist. I want to work with Matt Bellamy from Muse too, since he was my idol as a young tween and has a lot to do with me exploring non-classical music. AD: HAVE YOU WRITTEN SONGS FOR OTHER MUSICIANS? MO: I have not but I think it would be awesome to try it out. I would love to write for a male vocalist sometime. AD: ARE YOU COMPARED TO OTHER MAINSTREAM ARTISTS? WHO? MO: The main comparisons I receive generally include Bjork, Portishead and Imogen Heap. No complaints here! AD: DO YOU HAVE ANY STYLE ICONS? MO: I am really into underground and alternative fashion. I enjoy seeing the things that pin-up/burlesque model Mosh wears in her shoots. I also think Danish musician Oh Land has great style! Before Mei hits the stage, I have to ask, “Anything exciting planned for the upcoming year?” With a mysterious side smile and smirk, she says, “I have a lot of things up in the air right now. There may be a music video for my last track in the works, which is exciting for me since I’m very into visual things. I also have a few bar and club performances that may happen in March, or may be a little later. I am planning on playing violin (both classical and electric) with other artists, and am considering doing some gigs with live drums sometime in the future. So far with my career, I am approaching my music as though it’s something I had to do for me and not something I was too ambitious with. Now that I am finding my niche in the music world, I feel it's time to let myself dream big. The best way to know what is coming up is to check out my website: meiohara. com or my facebook: facebook.com/mei.ohara.music. 23 Armed with Vindice by Alyssa Davis

Exclusive interview with musician, Mei Ohara. This article was featured in the March issue of Papercut Magazine. Credits: Journalist & Sty...

Armed with Vindice by Alyssa Davis

Exclusive interview with musician, Mei Ohara. This article was featured in the March issue of Papercut Magazine. Credits: Journalist & Sty...