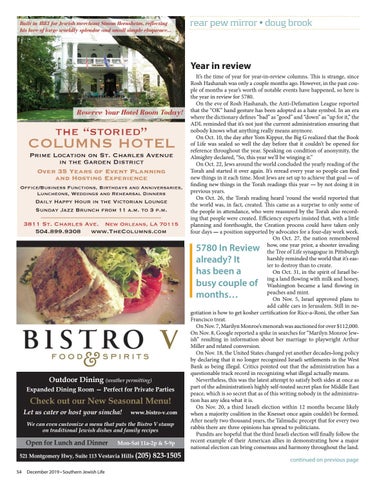 It’s the time of year for year-in-review columns. This is strange, since Rosh Hashanah was only a couple months ago. However, in the past couple of months a year’s worth of notable events have happened, so here is the year in review for 5780. On the eve of Rosh Hashanah, the Anti-Defamation League reported that the “OK” hand gesture has been adopted as a hate symbol. In an era where the dictionary defines “bad” as “good” and “down” as “up for it,” the ADL reminded that it’s not just the current administration ensuring that nobody knows what anything really means anymore. On Oct. 10, the day after Yom Kippur, the Big G realized that the Book of Life was sealed so well the day before that it couldn’t be opened for reference throughout the year. Speaking on condition of anonymity, the Almighty declared, “So, this year we’ll be winging it.” On Oct. 22, Jews around the world concluded the yearly reading of the Torah and started it over again. It’s reread every year so people can find new things in it each time. Most Jews are set up to achieve that goal — of finding new things in the Torah readings this year — by not doing it in previous years. On Oct. 26, the Torah reading heard ‘round the world reported that the world was, in fact, created. This came as a surprise to only some of the people in attendance, who were reassured by the Torah also recording that people were created. Efficiency experts insisted that, with a little planning and forethought, the Creation process could have taken only four days — a position supported by advocates for a four-day work week. On Oct. 27, the nation remembered how, one year prior, a shooter invading the Tree of Life synagogue in Pittsburgh harshly reminded the world that it’s easier to destroy than to create. On Oct. 31, in the spirit of Israel being a land flowing with milk and honey, Washington became a land flowing in peaches and mint. On Nov. 5, Israel approved plans to add cable cars in Jerusalem. Still in negotiation is how to get kosher certification for Rice-a-Roni, the other San Francisco treat. On Nov. 7, Marilyn Monroe’s menorah was auctioned for over $112,000. On Nov. 8, Google reported a spike in searches for “Marilyn Monroe Jewish” resulting in information about her marriage to playwright Arthur Miller and related conversion. On Nov. 18, the United States changed yet another decades-long policy by declaring that it no longer recognized Israeli settlements in the West Bank as being illegal. Critics pointed out that the administration has a questionable track record in recognizing what illegal actually means. Nevertheless, this was the latest attempt to satisfy both sides at once as part of the administration’s highly self-touted secret plan for Middle East peace, which is so secret that as of this writing nobody in the administration has any idea what it is. On Nov. 20, a third Israeli election within 12 months became likely when a majority coalition in the Knesset once again couldn’t be formed. After nearly two thousand years, the Talmudic precept that for every two rabbis there are three opinions has spread to politicians. Pundits are hopeful that the third Israeli election will finally follow the recent example of their American allies in demonstrating how a major national election can bring consensus and harmony throughout the land.

5780 In Review already? It has been a busy couple of months…

Check out our New Seasonal Menu! Let us cater or host your simcha!