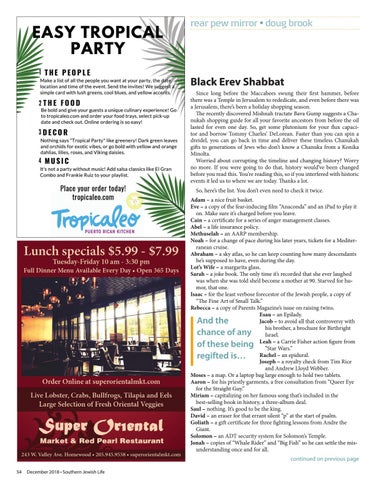 Black Erev Shabbat Since long before the Maccabees swung their first hammer, before there was a Temple in Jerusalem to rededicate, and even before there was a Jerusalem, there’s been a holiday shopping season. The recently discovered Mishnah tractate Bava Gump suggests a Chanukah shopping guide for all your favorite ancestors from before the oil lasted for even one day. So, get some plutonium for your flux capacitor and borrow Tommy Charles’ DeLorean. Faster than you can spin a dreidel, you can go back in time and deliver these timeless Chanukah gifts to generations of Jews who don’t know a Chanuka from a Konika Minolta. Worried about corrupting the timeline and changing history? Worry no more. If you were going to do that, history would’ve been changed before you read this. You’re reading this, so if you interfered with historic events it led us to where we are today. Thanks a lot. So, here’s the list. You don’t even need to check it twice. Adam – a nice fruit basket. Eve – a copy of the fear-inducing film “Anaconda” and an iPad to play it on. Make sure it’s charged before you leave. Cain – a certificate for a series of anger management classes. Abel – a life insurance policy. Methuselah – an AARP membership. Noah – for a change of pace during his later years, tickets for a Mediterranean cruise. Abraham – a sky atlas, so he can keep counting how many descendants he’s supposed to have, even during the day. Lot’s Wife – a margarita glass. Sarah – a joke book. The only time it’s recorded that she ever laughed was when she was told she’d become a mother at 90. Starved for humor, that one. Isaac – for the least verbose forecestor of the Jewish people, a copy of “The Fine Art of Small Talk.” Rebecca – a copy of Parents Magazine’s issue on raising twins. Esau – an Epilady. Jacob – to avoid all that controversy with And the his brother, a brochure for Birthright chance of any Israel. – a Carrie Fisher action figure from of these being Leah “Star Wars.” regifted is… Rachel – an epidural. Joseph – a royalty check from Tim Rice and Andrew Lloyd Webber. Moses – a map. Or a laptop bag large enough to hold two tablets. Aaron – for his priestly garments, a free consultation from “Queer Eye for the Straight Guy.” Miriam – capitalizing on her famous song that’s included in the best-selling book in history, a three-album deal. Saul – nothing. It’s good to be the king. David – an eraser for that errant silent “p” at the start of psalm. Goliath – a gift certificate for three fighting lessons from Andre the Giant. Solomon – an ADT security system for Solomon’s Temple. Jonah – copies of “Whale Rider” and “Big Fish” so he can settle the misunderstanding once and for all. continued on previous page 54