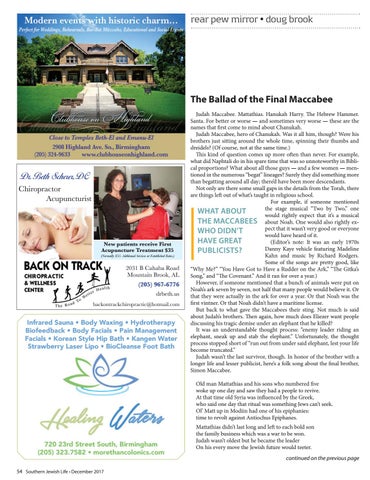 The Ballad of the Final Maccabee

Judah Maccabee. Mattathias. Hanukah Harry. The Hebrew Hammer. Santa. For better or worse — and sometimes very worse — these are the names that first come to mind about Chanukah. Judah Maccabee, hero of Chanukah. Was it all him, though? Were his brothers just sitting around the whole time, spinning their thumbs and dreidels? (Of course, not at the same time.) This kind of question comes up more often than never. For example, what did Naphtali do in his spare time that was so unnoteworthy in Biblical proportions? What about all those guys — and a few women — mentioned in the numerous “begat” lineages? Surely they did something more than begatting around all day; there’d have been more descendants. Not only are there some small gaps in the details from the Torah, there are things left out of what’s taught in religious school. For example, if someone mentioned the stage musical “Two by Two,” one WHAT ABOUT would rightly expect that it’s a musical THE MACCABEES about Noah. One would also rightly expect that it wasn’t very good or everyone WHO DIDN’T would have heard of it. HAVE GREAT (Editor’s note: It was an early 1970s Danny Kaye vehicle featuring Madeline PUBLICISTS? Kahn and music by Richard Rodgers. Some of the songs are pretty good, like “Why Me?” “You Have Got to Have a Rudder on the Ark,” “The Gitka’s Song,” and “The Covenant.” And it ran for over a year.) However, if someone mentioned that a bunch of animals were put on Noah’s ark seven by seven, not half that many people would believe it. Or that they were actually in the ark for over a year. Or that Noah was the first vintner. Or that Noah didn’t have a maritime license. But back to what gave the Maccabees their sting. Not much is said about Judah’s brothers. Then again, how much does Eliezer want people discussing his tragic demise under an elephant that he killed? It was an understandable thought process: “enemy leader riding an elephant, sneak up and stab the elephant.” Unfortunately, the thought process stopped short of “run out from under said elephant, lest your life become truncated.” Judah wasn’t the last survivor, though. In honor of the brother with a longer life and lesser publicist, here’s a folk song about the final brother, Simon Maccabee. Old man Mattathias and his sons who numbered five woke up one day and saw they had a people to revive. At that time old Syria was influenced by the Greek, who said one day that ritual was something Jews can’t seek. Ol’ Matt up in Modiin had one of his epiphanies: time to revolt against Antiochus Epiphanes.

Mattathias didn’t last long and left to each bold son the family business which was a war to be won. Judah wasn’t oldest but he became the leader On his every move the Jewish future would teeter. continued on the previous page