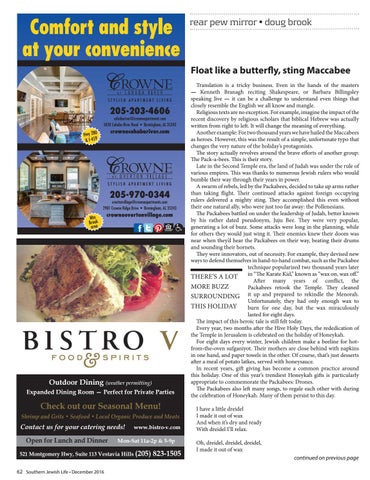 Comfort and style at your convenience

Translation is a tricky business. Even in the hands of the masters — Kenneth Branagh reciting Shakespeare, or Barbara Billingsley speaking Jive — it can be a challenge to understand even things that closely resemble the English we all know and mangle. Religious texts are no exception. For example, imagine the impact of the recent discovery by religious scholars that biblical Hebrew was actually written from right to left. It will change the meaning of everything. Another example: For two thousand years we have hailed the Maccabees as heroes. However, this was the result of a simple, unfortunate typo that changes the very nature of the holiday’s protagonists. The story actually revolves around the brave efforts of another group: The Pack-a-bees. This is their story. Late in the Second Temple era, the land of Judah was under the rule of various empires. This was thanks to numerous Jewish rulers who would bumble their way through their years in power. A swarm of rebels, led by the Packabees, decided to take up arms rather than taking flight. Their continued attacks against foreign occupying rulers delivered a mighty sting. They accomplished this even without their one natural ally, who were just too far away: the Pollenesians. The Packabees battled on under the leadership of Judah, better known by his rather dated pseudonym, Juju Bee. They were very popular, generating a lot of buzz. Some attacks were long in the planning, while for others they would just wing it. Their enemies knew their doom was near when they’d hear the Packabees on their way, beating their drums and sounding their hornets. They were innovators, out of necessity. For example, they devised new ways to defend themselves in hand-to-hand combat, such as the Packabee technique popularized two thousand years later THERE’S A LOT in “The Karate Kid,” known as “wax on, wax off.” After many years of conflict, the MORE BUZZ Packabees retook the Temple. They cleaned SURROUNDING it up and prepared to rekindle the Menorah. Unfortunately, they had only enough wax to THIS HOLIDAY burn for one day, but the wax miraculously lasted for eight days. The impact of this heroic tale is still felt today. Every year, two months after the Hive Holy Days, the rededication of the Temple in Jerusalem is celebrated on the holiday of Honeykah. For eight days every winter, Jewish children make a beeline for hotfrom-the-oven sufganiyot. Their mothers are close behind with napkins in one hand, and paper towels in the other. Of course, that’s just desserts after a meal of potato latkes, served with honeysauce. In recent years, gift giving has become a common practice around this holiday. One of this year’s trendiest Honeykah gifts is particularly appropriate to commemorate the Packabees: Drones. The Packabees also left many songs, to regale each other with during the celebration of Honeykah. Many of them persist to this day. I have a little dreidel I made it out of wax And when it’s dry and ready With dreidel I’ll relax. Oh, dreidel, dreidel, dreidel, I made it out of wax continued on previous page