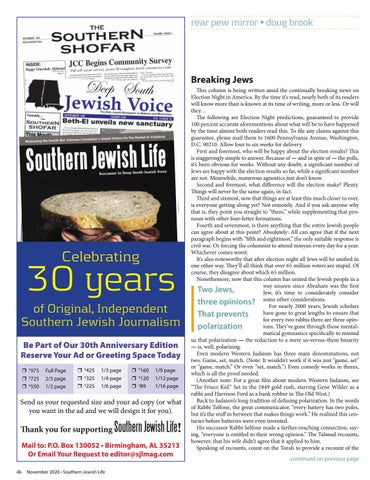 Send us your requested size and your ad copy (or what you want in the ad and we will design it for you).

Thank you for supporting

This column is being written amid the continually breaking news on Election Night in America. By the time it’s read, nearly both of its readers will know more than is known at its time of writing, more or less. Or will they… The following are Election Night predictions, guaranteed to provide 100 percent accurate aforementions about what will be to have happened by the time almost both readers read this. To file any claims against this guarantee, please mail them to 1600 Pennsylvania Avenue, Washington, D.C. 90210. Allow four to six weeks for delivery. First and foremost, who will be happy about the election results? This is staggeringly simple to answer. Because of — and in spite of — the polls, it’s been obvious for weeks. Without any doubt, a significant number of Jews are happy with the election results so far, while a significant number are not. Meanwhile, numerous agnostics just don’t know. Second and fivemost, what difference will the election make? Plenty. Things will never be the same again, in fact. Third and sixmost, now that things are at least this much closer to over, is everyone getting along yet? Not remotely. And if you ask anyone why that is, they point you straight to “them,” while supplementing that pronoun with other four-letter formations. Fourth and sevenmost, is there anything that the entire Jewish people can agree about at this point? Absolutely: All can agree that if the next paragraph begins with “fifth and eightmost,” the only suitable response is civil war. Or forcing the columnist to attend minyan every day for a year. Whichever comes worst. It’s also noteworthy that after election night all Jews will be unified in one other way. They’ll all think that over 65 million voters are stupid. Of course, they disagree about which 65 million. Nonethemore, now that this column has united the Jewish people in a way unseen since Abraham was the first Two Jews, Jew, it’s time to considerately consider other considerations. three opinions? some For nearly 2000 years, Jewish scholars have gone to great lengths to ensure that That prevents for every two rabbis there are three opinions. They’ve gone through those mentalpolarization matical gymnastics specifically to remind us that polarization — the reduction to a mere us-versus-them binarity — is, well, polarizing. Even modern Western Judaism has three main denominations, not two. Game, set, match. (Note: It wouldn’t work if it was just “game, set” or “game, match.” Or even “set, match.”) Even comedy works in threes, which is all the proof needed. (Another note: For a great film about modern Western Judaism, see “The Frisco Kid.” Set in the 1849 gold rush, starring Gene Wilder as a rabbi and Harrison Ford as a bank robber in The Old West.) Back to Judaism’s long tradition of defusing polarization. In the words of Rabbi Telfone, the great communicator, “every battery has two poles, but it’s the stuff in between that makes things work.” He realized this centuries before batteries were even invented. His successor Rabbi Selfone made a farther-reaching connection, saying, “everyone is entitled to their wrong opinion.” The Talmud recounts, however, that his wife didn’t agree that it applied to him. Speaking of recounts, count on the Torah to provide a recount of the continued on previous page