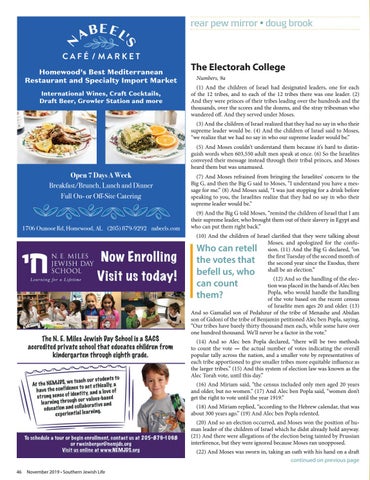 Open 7 Days A Week Breakfast/Brunch, Lunch and Dinner Full On- or Off-Site Catering

(5) And Moses couldn’t understand them because it’s hard to distinguish words when 603,550 adult men speak at once. (6) So the Israelites conveyed their message instead through their tribal princes, and Moses heard them but was unamused. (7) And Moses refrained from bringing the Israelites’ concern to the Big G, and then the Big G said to Moses, “I understand you have a message for me.” (8) And Moses said, “I was just stopping for a drink before speaking to you, the Israelites realize that they had no say in who their supreme leader would be.” (9) And the Big G told Moses, “remind the children of Israel that I am their supreme leader, who brought them out of their slavery in Egypt and who can put them right back.” (10) And the children of Israel clarified that they were talking about Moses, and apologized for the confusion. (11) And the Big G declared, “on the first Tuesday of the second month of the second year since the Exodus, there shall be an election.”

Who can retell the votes that befell us, who can count them?

(12) And so the handling of the election was placed in the hands of Alec ben Popla, who would handle the handling of the vote based on the recent census of Israelite men ages 20 and older. (13) And so Gamaliel son of Pedahzur of the tribe of Menashe and Abidan son of Gidoni of the tribe of Benjamin petitioned Alec ben Popla, saying, “Our tribes have barely thirty thousand men each, while some have over one hundred thousand. We’ll never be a factor in the vote.” (14) And so Alec ben Popla declared, “there will be two methods to count the vote — the actual number of votes indicating the overall popular tally across the nation, and a smaller vote by representatives of each tribe apportioned to give smaller tribes more equitable influence as the larger tribes.” (15) And this system of election law was known as the Alec Torah vote, until this day.” (16) And Miriam said, “the census included only men aged 20 years and older, but no women.” (17) And Alec ben Popla said, “women don’t get the right to vote until the year 1919.” (18) And Miriam replied, “according to the Hebrew calendar, that was about 300 years ago.” (19) And Alec ben Popla relented. (20) And so an election occurred, and Moses won the position of human leader of the children of Israel which he didst already hold anyway. (21) And there were allegations of the election being tainted by Prussian interference, but they were ignored because Moses ran unopposed. (22) And Moses was sworn in, taking an oath with his hand on a draft continued on previous page 46