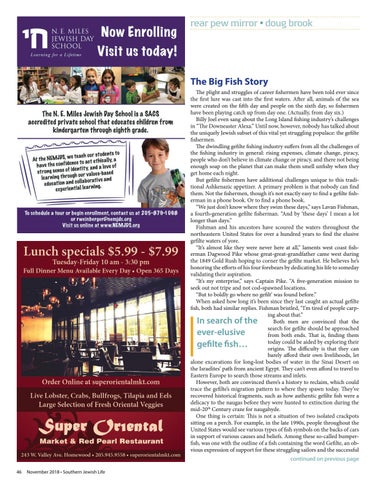 The Big Fish Story The plight and struggles of career fishermen have been told ever since the first lure was cast into the first waters. After all, animals of the sea were created on the fifth day and people on the sixth day, so fishermen have been playing catch up from day one. (Actually, from day six.) Billy Joel even sang about the Long Island fishing industry’s challenges in “The Downeaster Alexa.” Until now, however, nobody has talked about the uniquely Jewish subset of this vital yet struggling populace: the gefilte fishermen. The dwindling gefilte fishing industry suffers from all the challenges of the fishing industry in general: rising expenses, climate change, piracy, people who don’t believe in climate change or piracy, and there not being enough soap on the planet that can make them smell unfishy when they get home each night. But gefilte fishermen have additional challenges unique to this traditional Ashkenazic appetizer. A primary problem is that nobody can find them. Not the fishermen, though it’s not exactly easy to find a gefilte fisherman in a phone book. Or to find a phone book. “We just don’t know where they swim these days,” says Lavan Fishman, a fourth-generation gefilte fisherman. “And by ‘these days’ I mean a lot longer than days.” Fishman and his ancestors have scoured the waters throughout the northeastern United States for over a hundred years to find the elusive gefilte waters of yore. “It’s almost like they were never here at all,” laments west coast fisherman Dagwood Pike whose great-great-grandfather came west during the 1849 Gold Rush hoping to corner the gefilte market. He believes he’s honoring the efforts of his four forebears by dedicating his life to someday validating their aspiration. “It’s my enterprise,” says Captain Pike. “A five-generation mission to seek out not tripe and not cod-spawned locations. “But to boldly go where no gefilt’ was found before.” When asked how long it’s been since they last caught an actual gefilte fish, both had similar replies. Fishman bristled, “I’m tired of people carping about that.” Both men are convinced that the In search of the search for gefilte should be approached ever-elusive from both ends. That is, finding them today could be aided by exploring their gefilte fish… origins. The difficulty is that they can barely afford their own livelihoods, let alone excavations for long-lost bodies of water in the Sinai Desert on the Israelites’ path from ancient Egypt. They can’t even afford to travel to Eastern Europe to search those streams and inlets. However, both are convinced there’s a history to reclaim, which could trace the gefilte’s migration pattern to where they spawn today. They’ve recovered historical fragments, such as how authentic gefilte fish were a delicacy to the naugas before they were hunted to extinction during the mid-20th Century craze for naugahyde. One thing is certain: This is not a situation of two isolated crackpots sitting on a perch. For example, in the late 1990s, people throughout the United States would see various types of fish symbols on the backs of cars in support of various causes and beliefs. Among these so-called bumperfish, was one with the outline of a fish containing the word Gefilte, an obvious expression of support for these struggling sailors and the successful continued on previous page 46