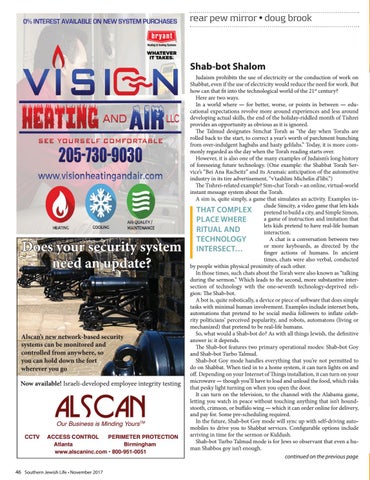 Does your security system need an update?

Alscan’s new network-based security systems can be monitored and controlled from anywhere, so you can hold down the fort wherever you go Now available! Israeli-developed employee integrity testing

Our Business is Minding YoursTM CCTV

Judaism prohibits the use of electricity or the conduction of work on Shabbat, even if the use of electricity would reduce the need for work. But how can that fit into the technological world of the 21st century? Here are two ways. In a world where — for better, worse, or points in between — educational expectations revolve more around experiences and less around developing actual skills, the end of the holiday-riddled month of Tishrei provides an opportunity as obvious as it is ignored. The Talmud designates Simchat Torah as “the day when Torahs are rolled back to the start, to correct a year’s worth of parchment bunching from over-indulgent hagbahs and hasty gelilahs.” Today, it is more commonly regarded as the day when the Torah reading starts over. However, it is also one of the many examples of Judaism’s long history of foreseeing future technology. (One example: the Shabbat Torah Service’s “Bei Ana Racheitz” and its Aramaic anticipation of the automotive industry in its tire advertisement, “v’tashlim Michelin d’libi.”) The Tishrei-related example? Sim-chat Torah – an online, virtual-world instant message system about the Torah. A sim is, quite simply, a game that simulates an activity. Examples include Simcity, a video game that lets kids THAT COMPLEX pretend to build a city, and Simple Simon, a game of instruction and imitation that PLACE WHERE lets kids pretend to have real-life human RITUAL AND interaction. A chat is a conversation between two TECHNOLOGY or more keyboards, as directed by the INTERSECT… finger actions of humans. In ancient times, chats were also verbal, conducted by people within physical proximity of each other. In those times, such chats about the Torah were also known as “talking during the sermon.” Which leads to the second, more substantive intersection of technology with the one-seventh technology-deprived religion: The Shab-bot. A bot is, quite robotically, a device or piece of software that does simple tasks with minimal human involvement. Examples include internet bots, automations that pretend to be social media followers to inflate celebrity politicians’ perceived popularity, and robots, automatons (living or mechanized) that pretend to be real-life humans. So, what would a Shab-bot do? As with all things Jewish, the definitive answer is: it depends. The Shab-bot features two primary operational modes: Shab-bot Goy and Shab-bot Turbo Talmud. Shab-bot Goy mode handles everything that you’re not permitted to do on Shabbat. When tied in to a home system, it can turn lights on and off. Depending on your Internet of Things installation, it can turn on your microwave — though you’ll have to load and unload the food, which risks that pesky light turning on when you open the door. It can turn on the television, to the channel with the Alabama game, letting you watch in peace without touching anything that isn’t houndstooth, crimson, or buffalo wing — which it can order online for delivery, and pay for. Some pre-scheduling required. In the future, Shab-bot Goy mode will sync up with self-driving automobiles to drive you to Shabbat services. Configurable options include arriving in time for the sermon or Kiddush. Shab-bot Turbo Talmud mode is for Jews so observant that even a human Shabbos goy isn’t enough. continued on the previous page