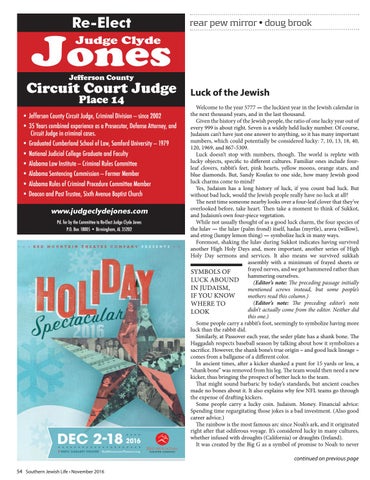 Luck of the Jewish Welcome to the year 5777 — the luckiest year in the Jewish calendar in the next thousand years, and in the last thousand. Given the history of the Jewish people, the ratio of one lucky year out of every 999 is about right. Seven is a widely held lucky number. Of course, Judaism can’t have just one answer to anything, so it has many important numbers, which could potentially be considered lucky: 7, 10, 13, 18, 40, 120, 1969, and 867-5309. Luck doesn’t stop with numbers, though. The world is replete with lucky objects, specific to different cultures. Familiar ones include fourleaf clovers, rabbit’s feet, pink hearts, yellow moons, orange stars, and blue diamonds. But, Sandy Koufax to one side, how many Jewish good luck charms come to mind? Yes, Judaism has a long history of luck, if you count bad luck. But without bad luck, would the Jewish people really have no luck at all? The next time someone nearby looks over a four-leaf clover that they’ve overlooked before, take heart. Then take a moment to think of Sukkot, and Judaism’s own four-piece vegetation. While not usually thought of as a good luck charm, the four species of the lulav — the lulav (palm frond) itself, hadas (myrtle), arava (willow), and etrog (lumpy lemon thing) — symbolize luck in many ways. Foremost, shaking the lulav during Sukkot indicates having survived another High Holy Days and, more important, another series of High Holy Day sermons and services. It also means we survived sukkah assembly with a minimum of frayed sheets or frayed nerves, and we got hammered rather than SYMBOLS OF hammering ourselves. LUCK ABOUND (Editor’s note: The preceding passage initially IN JUDAISM, mentioned screws instead, but some people’s IF YOU KNOW mothers read this column.) (Editor’s note: The preceding editor’s note WHERE TO didn’t actually come from the editor. Neither did LOOK this one.) Some people carry a rabbit’s foot, seemingly to symbolize having more luck than the rabbit did. Similarly, at Passover each year, the seder plate has a shank bone. The Haggadah respects baseball season by talking about how it symbolizes a sacrifice. However, the shank bone’s true origin – and good luck lineage – comes from a ballgame of a different color. In ancient times, after a kicker shanked a punt for 15 yards or less, a “shank bone” was removed from his leg. The team would then need a new kicker, thus bringing the prospect of better luck to the team. That might sound barbaric by today’s standards, but ancient coaches made no bones about it. It also explains why few NFL teams go through the expense of drafting kickers. Some people carry a lucky coin. Judaism. Money. Financial advice: Spending time regurgitating those jokes is a bad investment. (Also good career advice.) The rainbow is the most famous arc since Noah’s ark, and it originated right after that odiferous voyage. It’s considered lucky in many cultures, whether infused with droughts (California) or draughts (Ireland). It was created by the Big G as a symbol of promise to Noah to never continued on previous page