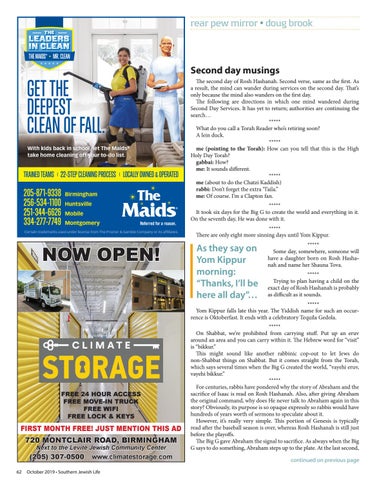 GET THE DEEPEST CLEAN OF FALL. With kids back in school, let The Maids® take home cleaning off your to-do list.

Certain trademarks used under license from The Procter &amp; Gamble Company or its affiliates.

Second day musings The second day of Rosh Hashanah. Second verse, same as the first. As a result, the mind can wander during services on the second day. That’s only because the mind also wanders on the first day. The following are directions in which one mind wandered during Second Day Services. It has yet to return; authorities are continuing the search… ***** What do you call a Torah Reader who’s retiring soon? A lein duck. ***** me (pointing to the Torah): How can you tell that this is the High Holy Day Torah? gabbai: How? me: It sounds different. ***** me (about to do the Chatzi Kaddish) rabbi: Don’t forget the extra “l’aila.” me: Of course. I’m a Clapton fan. ***** It took six days for the Big G to create the world and everything in it. On the seventh day, He was done with it. ***** There are only eight more sinning days until Yom Kippur.

As they say on Yom Kippur morning: “Thanks, I’ll be here all day”…

***** Some day, somewhere, someone will have a daughter born on Rosh Hashanah and name her Shauna Tova. ***** Trying to plan having a child on the exact day of Rosh Hashanah is probably as difficult as it sounds.

***** Yom Kippur falls late this year. The Yiddish name for such an occurrence is Oktoberfast. It ends with a celebratory Tequila Gedola.

***** On Shabbat, we’re prohibited from carrying stuff. Put up an eruv around an area and you can carry within it. The Hebrew word for “visit” is “bikkur.” This might sound like another rabbinic cop-out to let Jews do non-Shabbat things on Shabbat. But it comes straight from the Torah, which says several times when the Big G created the world, “vayehi eruv, vayehi bikkur.” ***** For centuries, rabbis have pondered why the story of Abraham and the sacrifice of Isaac is read on Rosh Hashanah. Also, after giving Abraham the original command, why does He never talk to Abraham again in this story? Obviously, its purpose is so opaque expressly so rabbis would have hundreds of years worth of sermons to speculate about it. However, it’s really very simple. This portion of Genesis is typically read after the baseball season is over, whereas Rosh Hashanah is still just before the playoffs. The Big G gave Abraham the signal to sacrifice. As always when the Big G says to do something, Abraham steps up to the plate. At the last second, continued on previous page