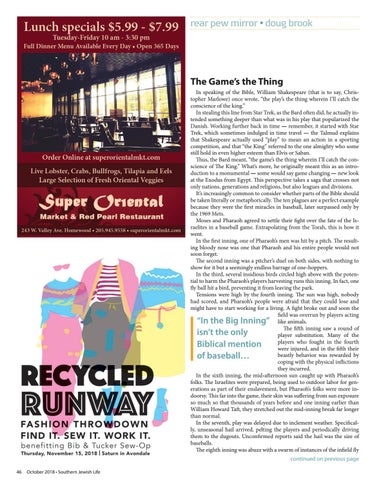 The Game’s the Thing In speaking of the Bible, William Shakespeare (that is to say, Christopher Marlowe) once wrote, “the play’s the thing wherein I’ll catch the conscience of the king.” In stealing this line from Star Trek, as the Bard often did, he actually intended something deeper than what was in his play that popularized the Danish. Working further back in time — remember, it started with Star Trek, which sometimes indulged in time travel — the Talmud explains that Shakespeare actually used “play” to mean an action in a sporting competition, and that “the King” referred to the one almighty who some still hold in even higher esteem than Elvis or Saban. Thus, the Bard meant, “the game’s the thing wherein I’ll catch the conscience of The King.” What’s more, he originally meant this as an introduction to a monumental — some would say game changing — new look at the Exodus from Egypt. This perspective takes a saga that crosses not only nations, generations and religions, but also leagues and divisions. It’s increasingly common to consider whether parts of the Bible should be taken literally or metaphorically. The ten plagues are a perfect example because they were the first miracles in baseball, later surpassed only by the 1969 Mets. Moses and Pharaoh agreed to settle their fight over the fate of the Israelites in a baseball game. Extrapolating from the Torah, this is how it went. In the first inning, one of Pharaoh’s men was hit by a pitch. The resulting bloody nose was one that Pharaoh and his entire people would not soon forget. The second inning was a pitcher’s duel on both sides, with nothing to show for it but a seemingly endless barrage of one-hoppers. In the third, several insidious birds circled high above with the potential to harm the Pharaoh’s players harvesting runs this inning. In fact, one fly ball hit a bird, preventing it from leaving the park. Tensions were high by the fourth inning. The sun was high, nobody had scored, and Pharaoh’s people were afraid that they could lose and might have to start working for a living. A fight broke out and soon the field was overrun by players acting “In the Big Inning” like animals. The fifth inning saw a round of isn’t the only player substitution. Many of the players who fought in the fourth Biblical mention were injured, and in the fifth their beastly behavior was rewarded by of baseball… coping with the physical inflictions they incurred. In the sixth inning, the mid-afternoon sun caught up with Pharaoh’s folks. The Israelites were prepared, being used to outdoor labor for generations as part of their enslavement, but Pharaoh’s folks were more indoorsy. This far into the game, their skin was suffering from sun exposure so much so that thousands of years before and one inning earlier than William Howard Taft, they stretched out the mid-inning break far longer than normal. In the seventh, play was delayed due to inclement weather. Specifically, unseasonal hail arrived, pelting the players and periodically driving them to the dugouts. Unconfirmed reports said the hail was the size of baseballs. The eighth inning was abuzz with a swarm of instances of the infield fly continued on previous page 46