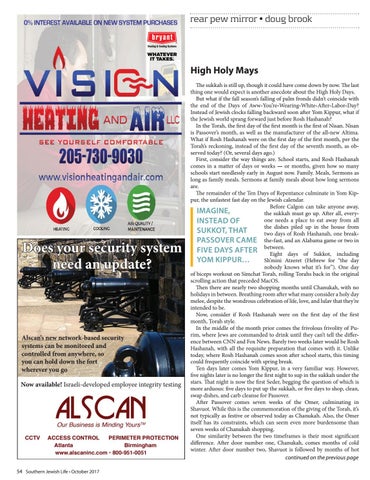 Does your security system need an update?

Alscan’s new network-based security systems can be monitored and controlled from anywhere, so you can hold down the fort wherever you go Now available! Israeli-developed employee integrity testing

Our Business is Minding YoursTM CCTV

The sukkah is still up, though it could have come down by now. The last thing one would expect is another anecdote about the High Holy Days. But what if the fall season’s falling of palm fronds didn’t coincide with the end of the Days of Aww-You’re-Wearing-White-After-Labor-Day? Instead of Jewish clocks falling backward soon after Yom Kippur, what if the Jewish world sprang forward just before Rosh Hashanah? In the Torah, the first day of the first month is the first of Nisan. Nisan is Passover’s month, as well as the manufacturer of the all-new Altima. What if Rosh Hashanah were on the first day of the first month, per the Torah’s reckoning, instead of the first day of the seventh month, as observed today? (Or, several days ago.) First, consider the way things are. School starts, and Rosh Hashanah comes in a matter of days or weeks — or months, given how so many schools start needlessly early in August now. Family. Meals, Sermons as long as family meals. Sermons at family meals about how long sermons are. The remainder of the Ten Days of Repentance culminate in Yom Kippur, the unfastest fast day on the Jewish calendar. Before Calgon can take anyone away, IMAGINE, the sukkah must go up. After all, everyone needs a place to eat away from all INSTEAD OF the dishes piled up in the house from SUKKOT, THAT two days of Rosh Hashanah, one breakPASSOVER CAME the-fast, and an Alabama game or two in FIVE DAYS AFTER between. Eight days of Sukkot, including YOM KIPPUR… Sh’mini Atzeret (Hebrew for “the day nobody knows what it’s for”). One day of biceps workout on Simchat Torah, rolling Torahs back in the original scrolling action that preceded MacOS. Then there are nearly two shopping months until Chanukah, with no holidays in between. Breathing room after what many consider a holy day melee, despite the wondrous celebration of life, love, and lulav that they’re intended to be. Now, consider if Rosh Hashanah were on the first day of the first month, Torah style. In the middle of the month prior comes the frivolous frivolity of Purim, where Jews are commanded to drink until they can’t tell the difference between CNN and Fox News. Barely two weeks later would be Rosh Hashanah, with all the requisite preparation that comes with it. Unlike today, where Rosh Hashanah comes soon after school starts, this timing could frequently coincide with spring break. Ten days later comes Yom Kippur, in a very familiar way. However, five nights later is no longer the first night to sup in the sukkah under the stars. That night is now the first Seder, begging the question of which is more arduous: five days to put up the sukkah, or five days to shop, clean, swap dishes, and carb cleanse for Passover. After Passover comes seven weeks of the Omer, culminating in Shavuot. While this is the commemoration of the giving of the Torah, it’s not typically as festive or observed today as Chanukah. Also, the Omer itself has its constraints, which can seem even more burdensome than seven weeks of Chanukah shopping. One similarity between the two timeframes is their most significant difference. After door number one, Chanukah, comes months of cold winter. After door number two, Shavuot is followed by months of hot continued on the previous page