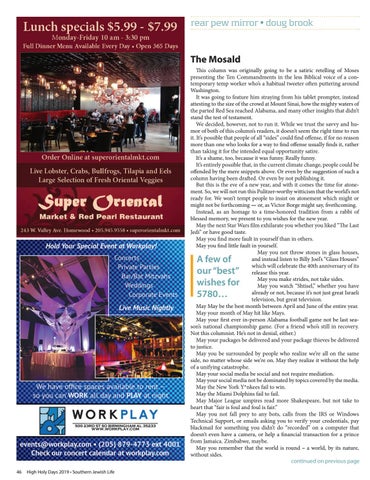 The Mosald This column was originally going to be a satiric retelling of Moses presenting the Ten Commandments in the less Biblical voice of a contemporary temp worker who’s a habitual tweeter often puttering around Washington. It was going to feature him straying from his tablet prompter, instead attesting to the size of the crowd at Mount Sinai, how the mighty waters of the parted Red Sea reached Alabama, and many other insights that didn’t stand the test of testament. We decided, however, not to run it. While we trust the savvy and humor of both of this column’s readers, it doesn’t seem the right time to run it. It’s possible that people of all “sides” could find offense, if for no reason more than one who looks for a way to find offense usually finds it, rather than taking it for the intended equal opportunity satire. It’s a shame, too, because it was funny. Really funny. It’s entirely possible that, in the current climate change, people could be offended by the mere snippets above. Or even by the suggestion of such a column having been drafted. Or even by not publishing it. But this is the eve of a new year, and with it comes the time for atonement. So, we will not run this Pulitzer-worthy witticism that the world’s not ready for. We won’t tempt people to insist on atonement which might or might not be forthcoming — or, as Victor Borge might say, fivethcoming. Instead, as an homage to a time-honored tradition from a rabbi of blessed memory, we present to you wishes for the new year. May the next Star Wars film exhilarate you whether you liked “The Last Jedi” or have good taste. May you find more fault in yourself than in others. May you find little fault in yourself. May you not throw stones in glass houses, and instead listen to Billy Joel’s “Glass Houses” which will celebrate the 40th anniversary of its release this year. May you make strides, not take sides. May you watch “Shtisel,” whether you have already or not, because it’s not just great Israeli television, but great television. May May be the best month between April and June of the entire year. May your month of May hit like Mays. May your first ever in-person Alabama football game not be last season’s national championship game. (For a friend who’s still in recovery. Not this columnist. He’s not in denial, either.) May your packages be delivered and your package thieves be delivered to justice. May you be surrounded by people who realize we’re all on the same side, no matter whose side we’re on. May they realize it without the help of a unifying catastrophe. May your social media be social and not require mediation. May your social media not be dominated by topics covered by the media. May the New York Y*nkees fail to win. May the Miami Dolphins fail to fail. May Major League umpires read more Shakespeare, but not take to heart that “fair is foul and foul is fair.” May you not fall prey to any bots, calls from the IRS or Windows Technical Support, or emails asking you to verify your credentials, pay blackmail for something you didn’t do “recorded” on a computer that doesn’t even have a camera, or help a financial transaction for a prince from Jamaica. Zimbabwe, maybe. May you remember that the world is round – a world, by its nature, without sides. continued on previous page