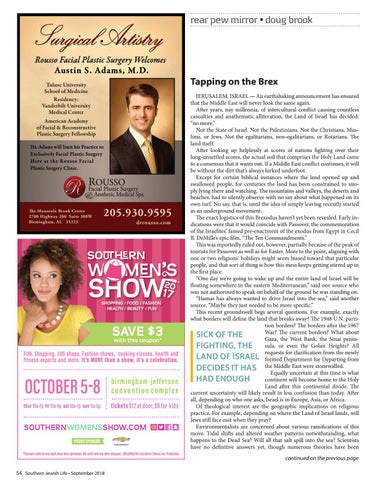 Tapping on the Brex

SAVE $3 with this coupon*

SOUTHERNWOMENSSHOW.COM PROUD SPONSOR *Discount valid on one adult show time admission. Not valid with any other discount. 800.849.0248 A Southern Shows, Inc. Production

JERUSALEM, ISRAEL — An earthshaking announcement has ensured that the Middle East will never look the same again. After years, nay millennia, of intercultural conflict causing countless casualties and anathematic alliteration, the Land of Israel has decided: “no more.” Not the State of Israel. Not the Palestinians. Not the Christians, Muslims, or Jews. Not the egalitarians, non-egalitarians, or Rotarians. The land itself. After looking up helplessly at scores of nations fighting over their long-unsettled scores, the actual soil that comprises the Holy Land came to a consensus that it wants out. If a Middle East conflict continues, it will be without the dirt that’s always lurked underfoot. Except for certain biblical instances where the land opened up and swallowed people, for centuries the land has been constrained to simply lying there and watching. The mountains and valleys, the deserts and beaches, had to silently observe with no say about what happened on its own turf. No say, that is, until the idea of simply leaving recently started as an underground movement. The exact logistics of this Brexodus haven’t yet been revealed. Early indications were that it would coincide with Passover, the commemoration of the Israelites’ famed pre-enactment of the exodus from Egypt in Cecil B. DeMille’s epic film, “The Ten Commandments.” This was reportedly ruled out, however, partially because of the peak of tourists for Passover as well as for Easter. More to the point, aligning with one or two religions’ holidays might seem biased toward that particular people, and that sort of thing is how this mess keeps getting stirred up in the first place. “One day we’re going to wake up and the entire land of Israel will be floating somewhere in the eastern Mediterranean,” said one source who was not authorized to speak on behalf of the ground he was standing on. “Hamas has always wanted to drive Israel into the sea,” said another source. “Maybe they just needed to be more specific.” This recent groundswell begs several questions. For example, exactly what borders will define the land that breaks away? The 1948 U.N. partition borders? The borders after the 1967 War? The current borders? What about SICK OF THE Gaza, the West Bank, the Sinai peninFIGHTING, THE sula, or even the Golan Heights? All requests for clarification from the newly LAND OF ISRAEL formed Department for Departing from Middle East were stonewalled. DECIDES IT HAS theEqually uncertain at this time is what continent will become home to the Holy HAD ENOUGH Land after this continental divide. The current uncertainty will likely result in less confusion than today. After all, depending on who one asks, Israel is in Europe, Asia, or Africa. Of theological interest are the geographic implications on religious practice. For example, depending on where the Land of Israel lands, will Jews still face east when they pray? Environmentalists are concerned about various ramifications of this move. Tidal shifts and altered weather patterns notwithstanding, what happens to the Dead Sea? Will all that salt spill into the sea? Scientists have no definitive answers yet, though numerous theories have been continued on the previous page